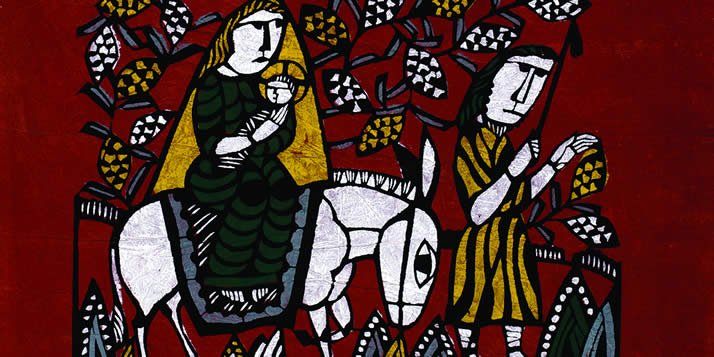 "Flight to Egypt," a hand colored stencil print is part of "Beauty Given By Grace: The Biblical Art of Sadao Watanabe." The exhibition is on display in Calvin's Center Art Gallery from Jan. 7 through Feb. 22.

Each year the Calvin Symposium on Worship includes top-flight speakers and seminar leaders. Hosted at Calvin since 1987, past events have brought to Grand Rapids such luminaries as N.T. Wright, Walter Brueggemann, Marva Dawn and Kenneth Bailey (to name just a few) while this year features such notables as Alison Adam, Jeremy Begbie, André Thomas and Anne Zaki.

But it's no accident that each day of the annual event begins and ends with worship. For at its heart Symposium is a lot less about big-name speakers and much more about the nitty-gritty, daily work of worship as befits an organization—the Calvin Institute of Christian Worship—that has as one part of its mission statement the goal of promoting the renewal of worship in worshiping communities across North America and beyond.

So the 2014 event, which is expected to draw some 1,500 participants to Calvin's campus from around the world between January 30 and February 1, will include six different worship services, four of which are repeated, plus afternoon vespers.

And this year on Friday night, at the midpoint of Symposium, they will be offering a service, free and open to all, called "God of Grace and God of Glory: An Exodus Triptych."

To be held in the Covenant Fine Arts Center auditorium, the service will turn the auditorium into the “Symposium family living room,” a place for telling stories, sharing gifts of songs, visual images, testimonies and prayers.

A focus on Exodus

Each movement will begin with a dramatic retelling of part of the story by students from Northwestern College in Orange City, Iowa, and members of Third Christian Reformed Church in Zeeland, Michigan. Visual proclamation is given by a variety of artists, including presenter Sandra Bowden.

Symposium 2014 also will have a strong connection to Japanese art via two shows being hosted in the college's Center Art Gallery, located adjacent to the Fine Arts Center auditorium and one floor down from the Symposium exhibitor space.

Of particular relevance to Symposium attendees is "Beauty Given By Grace: The Biblical Art of Sadao Watanabe," which opened Jan. 7 and runs through Feb. 22.

Born in 1913, Sadao Watanabe was baptized at 17 and devoted his life to depicting stories of the Bible in a visual language understandable to the Japanese. Finding inspiration in the mingei (folk arts) movement, he worked with his wife to produce each stencil and print on handmade paper.

As part of the exhibition and Symposium there will be a gallery talk (also free and open to all) with Sandra Bowden (who co-authored a book with Watanabe), John Hesselink (his interpreter) and John A. Kohan on Thursday, Jan. 30 at 6 p.m. with a reception to follow.

Bowden, in a recent Q&A on the Worship Institute website, said simply that Watanabe "created a body of art that is an expression of deep faith as well as a valuable contribution to the history of Christian art."

The symposium also will feature numerous other events, including smaller workshops and sessions, seminars, panel discussions, plenary addresses and more. Some events will be livestreamed on the Calvin website. The full program is available online.

Online registration closes for Symposium 2014 on Jan. 22. After that date walk-up registrations will be the only way to sign up. 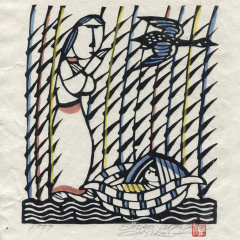 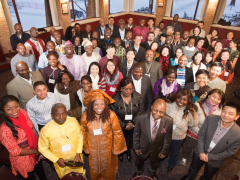