We Are Calvin: Grace Liao 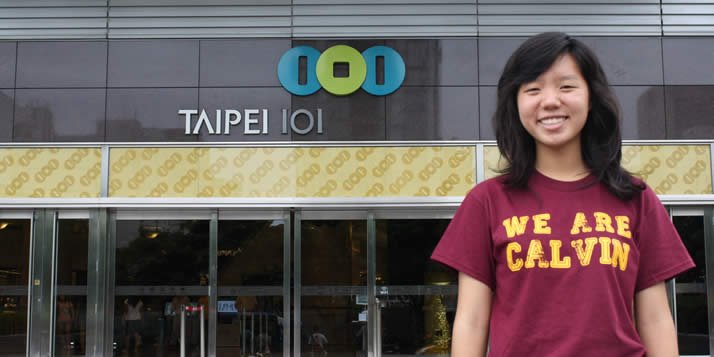 I am in Taiwan, which is a small island off the coast of China. To be more specific, I am in Taipei, the capital of Taiwan.

I came to Taiwan to visit my family and friends in the hope of building relationships with them and then sharing the gospel. Since my parents are first-generation Taiwanese immigrants who came to the United States, I have many relatives on both sides and also a few friends in Taiwan.

My typical day consists of spending quality time with God by reading His Word and praying, taking the metro to visit a family member, and then spending the rest of the day with an aunt, cousin or grandmother.

What are you doing?

I am visiting relatives and friends, learning more about Taiwanese culture and society, and learning Mandarin Chinese.

Taking Chinese classes from Professor Herzberg helped me a lot with learning the basics of Mandarin Chinese and thus with communicating with my family and friends. Although I already had some previous knowledge of Chinese before going to Calvin since my parents speak the language with me, learning Chinese academically prepared me for the many conversations that I had with the Taiwanese people.

God has also used the theology class I took with Professor McDonald at Calvin. This class greatly prepared me to share more about God since we looked at multiple topics from the Reformed perspective. Therefore, when people asked me questions about the Last Supper or about Jesus Christ, I was ready to explain and to respond to them since God had prepared me in advance.

Lastly, I decided to go to Taiwan after attending a Calvin spring break trip to St. Louis, Mo. There, we served many people and ministries, and those we served also taught us a lot. There was one African-American man we met named Chuck who said that he came to know Jesus Christ by his friend, so he stressed that when we preach the good news, it is necessary to first build a relationship and then share the gospel. The ministry also emphasized God’s command to serve the marginalized--the widow, the poor, the orphans. Putting this altogether, I felt God drawing me to the widows in my life, my grandmothers in Taiwan, and telling them the good news. And in Taiwan God exceeded my expectations of simply telling my paternal grandmother the gospel, for He allowed me to meet so many other family members and even friends of friends who I was able to share the gospel with. So, all praise, glory and honor to God!

The coolest thing that God revealed to me was how he is using his people to preach the gospel. When my father took my grandmother and me to a Taiwanese church, it just so happened that there was a group of traditional Taiwanese opera singers who came to the church that day to sing. With traditional Taiwanese instruments and traditional Taiwanese opera, these singers were preaching the gospel and telling the story of Jesus Christ. Although the opera singers themselves were not Christians, God was still using them to reach out to an audience that understood only Taiwanese. Through this, God demonstrated to me that He is sovereign and is still working in Taiwan to bring His people to Himself.

How do you see this shaping your future?

I would definitely be interested in returning to Taiwan in the future to visit relatives and friends; in fact, I plan on it! I would also be interested in any mission trip to a Chinese-speaking community.

Amongst Taiwanese youth, it is popular to confess one’s love to another with the use of love letters or chocolate. While I was at Danshui, my friends and I visited a cute candy and chocolate shop called Sophisca, which sells many cute boxes that contain chocolate inside; these are called gao bai chao ke li or directly translated in English to “confession chocolates." So the best picture was one of me holding three boxes that created the phrase wo ai ni or "I love you."