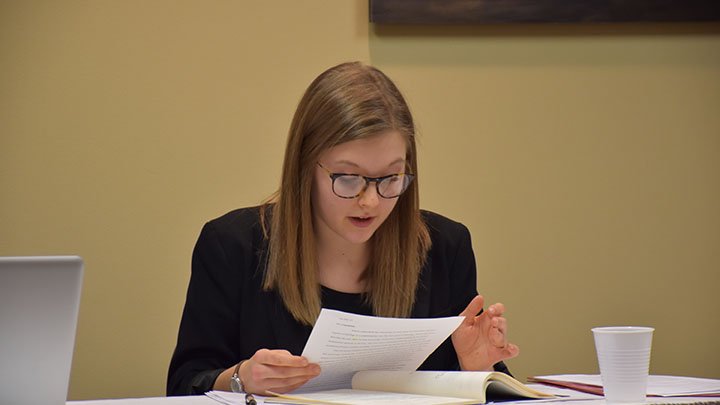 When sophomore Elena van Stee’s religion paper proposal was accepted to be presented at the regional meeting of the American Academy of Religion (AAR), she had no idea how much recognition it would receive.

“Professor Smit and I had skipped the awards ceremony to go out for lunch, so I didn't find out that I had won the undergraduate research award until someone approached me later that day,” van Stee said. “I was not expecting to receive an award!”

Van Stee (Timothy Christian H.S./Western Springs, Illinois) had originally written her paper for her theory and method religion class with professor Richard Plantinga. “In Theory and Method, we discussed what theology is and how one goes about doing theology,” van Stee said. “More specifically, we looked at the various responses that modern theologians have offered in an attempt to reconcile Christianity with modernism and postmodernism.”

Van Stee chose to write about Karl Rahner, a prominent Catholic theologian in the 20th century, for the assigned task of analyzing the theological method of a particular theologian. “I'm fascinated by Rahner because he wrestles with the question of what it looks like to be a Christian in the post-Enlightenment age of modern philosophy and religious plurality,” van Stee said.

“I focused my research more specifically on Rahner's soteriology—his theology of salvation. Rahner is deeply committed to his belief in Jesus Christ as a divine and salvific historical person, but he also sees evidence of God's radical self-communication to people outside the church. He believes that all humans are able to have real, albeit limited, intuitive knowledge of God.”

Van Stee, from the western suburbs of Chicago, was an intern at Fourth Presbyterian Church in Chicago in summer 2016, where she will intern again this summer. Her grandfather, professor emeritus David Holwerda, taught in Calvin’s religion department before transitioning to teaching New Testament at Calvin’s seminary.

Van Stee is interested in pursuing graduate studies in religion and wants to gain experience and exposure to the current scholarship. She’s currently working toward a French minor and will be studying abroad independently at the Sorbonne University in Paris in her undergraduate studies.

Calvin College religion professor Laura Smit accompanied van Stee to the regional meeting, as she presented her own paper as well on philosopher Bonaventure. Smit taught van Stee in a Religion 131 class and is also her advisor.

“Not only was the paper very well written, but Ms. van Stee did an exemplary job of reading it and of responding to questions posed by the faculty responder,” Smit said. “As a completely unbiased observer, I must say that, in addition to presenting the most academically impressive paper, she was clearly the most effective speaker. She was a credit to our department.”

Smit believes that these regional meetings are especially helpful for students who are considering an academic career, since they give students an opportunity to learn skills like presenting papers properly, listening to and retaining presentations, and asking meaningful questions.

“At Calvin, we do not simply study religion from the outside, as an anthropologist might, although there is value in such study. We study religion from the inside, as believers and practitioners,” Smit said. “And so our students are not simply studying ‘religion’ in general, but more specifically being apprenticed into the Christian tradition, specifically into the skills of listening to the Scriptures and participating faithfully in the great conversation about the gospel that stretches back to the disciples and extends around the globe. These are skills that are worthwhile for their own sake.”

For her paper, van Stee also won the Beets Calvinism Award, given by a committee in the religion department to a Calvin student each year for the best research paper in historical, theological or biblical studies. Any student who is enrolled in a religion class can submit their research paper for consideration for this award, which needs to address a systematic or historical theological theme, or a social, cultural or moral issue from a reformed perspective.

Van Stee's Beets Calvinism Award came with a $500 prize. In March she presented her paper at Theology Forum. In the near future, she'll be presenting it again in a similar setting as recognition for the Beets award.