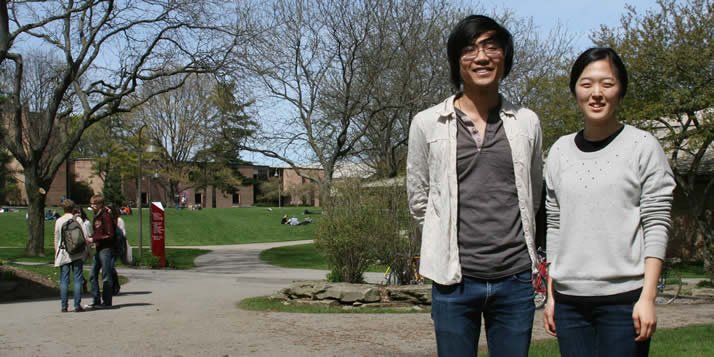 When Patrick Hekman viewed a movie about North Korean refugees last fall on Calvin's campus, he was moved to action.

The event was sponsored by the college's chapter of LiNK, Liberty in North Korea, which is made up primarily of students from South Korea (Calvin currently enrolls some 125 students from that country). But for Hekman, who is of Chinese ancestry and grew up in Hong Kong—one of approximately 50 Calvin students from mainland China or Hong Kong—the stories of North Korean refugees and the passion and emotion apparent in Calvin's South Korean students, struck a chord, as did the proximity of North Korea to his homeland of China.

"They asked for ideas to bring awareness about North Korea to people in west Michigan," he recalled, "and I felt compelled to do something. Our students were so inspiring and so moving. To hear their stories was powerful. And as I reflected on who I am as a Chinese person and the role of China in North Korea, I knew I wanted to do something to get involved. I later brought them an idea, a way to raise awareness, they liked it, and here we are."

"Here" will be an April 28 event in downtown Grand Rapids, a four-part affair that will include an art exhibition, the screening of "People's Crisis," a film about North Korea, testimonials from Calvin students and a reception.

Hekman said all of the different components to the event are important.

"They will all speak to people in different ways, I hope." said Hekman, a Calvin senior art major who was adopted from Hong Kong when he was already 13 years of age and admits that his own experience has given him a heart for refugees and a desire to create community. "My approach to art is always linked to society," Hekman said. "I want it to have a purpose and an integration with life. And I want to give people lots of different ways to get connected to this project. So the art provides one way, the film another, the first-person perspective something different and the conversations (at the reception) another way."

The art exhibition will be at the Division Avenue Arts Collective (DAAC), located at 115 South Division in Grand Rapids and billed on its website as: "a volunteer-run, all-ages music venue, art gallery, and DIY project incubator in downtown Grand Rapids."

The exhibition and receptions will run from 5 to 8 p.m. at the DAAC after which Hekman expects folks to make their way across the street to Calvin's gallery at 106 South Division, where from 8 to 10 p.m. that space will host first the film screening and then the testimonials.

The idea said Grace Kim, president of Calvin's LiNK chapter, is not to raise money, but to raise awareness.

"I think separation and injustice hurts God's heart," she said, "and so it hurts mine, too. I believe we need to do all we can to stop the North Korean Crisis. Nobody should be living under the fear of death and oppression, and so the story of these North Koreans must reach out to the world. I am called to believe that what I do matters and can make a difference. It may not be a change I see at this moment, but that is no excuse for me to be less hopeful."

As for Hekman's involvement, and doing an art exhibition, Kim said it is a stretch for the group, but one she was willing to take and a stretch she is grateful to have Hekman helping out with.

"So far we have had bake sales, fundraising events, that sort of thing," she said. "It's only LiNK's second year here at Calvin and witnessing a student with such passion and heart for the world gives us hope to press forward. He made it clear about the relational aspect of doing this project, and it was indeed a moving moment for us. Truly I could not have asked for more. He is a blessing to our group."

Kim is hopeful that the April 28 event will serve to heighten awareness of the situation in Korea.

"I hope that the voices of the voiceless around the world would resonate with the Grand Rapids community," she said. "I also hope that the community will become more aware of North Korean crisis.

Submissions can be sent to the LiNK exhibition committee prior to April 11 at 5 p.m. Artists must be 18 years of age or older and living in the U.S.
Accepted artwork will need to be delivered to the exhibition space and set up on April 28 between 9 a.m. and 5 p.m. and picked up at the end of the
show, either on April 28 or the morning of April 29. Hekman is looking for a wide variety of artwork around the theme, "giving voice." For more
information, contact linkartexhibition@gmail.com .