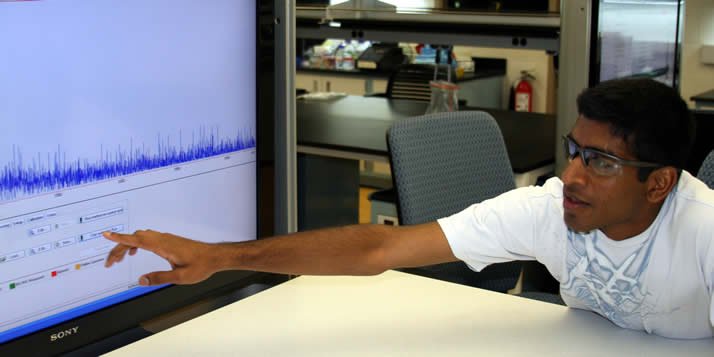 Student researchers are making themselves at home in the science division's new 4,450 square-foot lab.

Student researchers joke with each other as they unpack their materials and settle in at the new lab benches. An Avett Brothers album plays from the computer.

Using a rolling whiteboard, sophomore biology/biochem major Ryan Martinie is giving an impromptu lecture on the formation of tyrosine-cysteine crosslinks.

Then, sophomore Anand Divakaran explains a graph of the research displayed on the 40-inch LCD screen in one the lab’s collaborative workspaces.

Meanwhile, David Benson, the chemistry professor with whom both students are researching this summer, is reminding everyone to wear their safety goggles.

It’s move-in day at the Integrated Scientific Research Experimental Laboratory: the ISRx. The students—working there through 10-week Summer Research Fellowships—and the professors directing their research are the first to occupy and utilize the new space. The ISRx, a 4,450-square-foot wet lab constructed on the ground floor of the Science Building via a $951,150 Academic Research Infrastructure Grant from the National Science Foundation (NSF), provides the space and equipment for collaborative research between in the sciences.

The main lab of the ISRx—the “showcase lab,” Benson calls it— contains benches for chemistry, biology, physics and computer science research, all wrapped around two shared areas, where professors and students can plug in their laptops and work together.

The researchers will also share the equipment at the core of the lab: the MALDI-TOF mass spectrometer; the 500-megahertz NMR spectrometer and all of the other equipment crucial to molecular biology and chemical synthesis. “It’s really, literally, cutting-edge equipment that you would see at any research institute that our students have full access to,” Benson said.

Surrounding the ISRx are four other labs, including a virtual reality lab (current home to Calvin’s Jedi trainer) and areas for research that is light sensitive and magnetic-field sensitive.

The students also making themselves at home in the ISRx are excited about working together:

“It’s always bothered me that biologists and chemists don’t really talk to each other,” said junior Ari Davis, who is hoping the new setup strengthens the bonds between the two fields and leads to improved academic relationships. Davis, a biotech major, will be assisting Professor John Wertz in his research into bacteriophages.

Martinie agreed: “Before, the people we were collaborating with were in different labs, which only allowed for a certain amount of cross-pollination. It’s really cool to be in the same physical location as the people we’re working with.”

In fact, Martinie was so eager to get started, he moved in early: “The week before exam week, I just came here and moved in for about three hours because I wanted to be here—and working.” 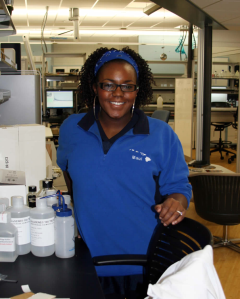 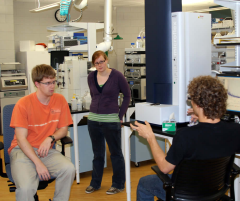 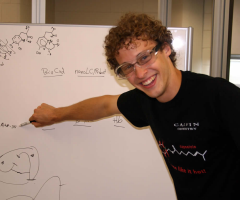 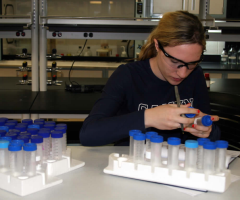