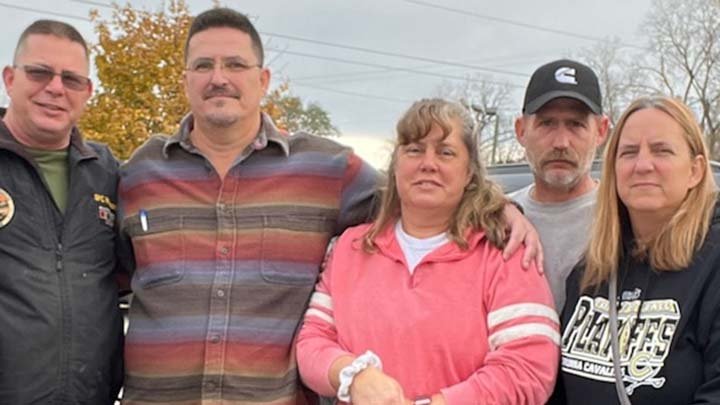 “I didn’t talk a lot, I just sat around and watched, it was just so peaceful to finally be there. You can hope for it, you can long for it, you can think about what it’s going to be like, but when you get there, you just soak it in and just enjoy it.”

This is how 53-year-old Ron Hammond, describes Thursday, November 25—Thanksgiving Day at his baby sister’s house.

For Hammond, sitting in a living room full of people who loved him couldn’t have been further from the reality he knew.

For the past 36 years, his reality was literally confined. Since December 6, 1985, Hammond was confined to cell blocks and prison yards for an armed robbery he committed that led to the loss of someone’s life.

Hammond went in at 17, and by the time he was 19, he was in a maximum-security prison in Jackson, in what he describes as the worst cell block in all of the state.

“You have 500 prisoners in one block. The cells go down the middle of the block, there’s no floors in between, it’s what you’ve seen on TV, tall open galleries, and every single person who is there has a violent prison record. You don’t get there by accident,” said Hammond.

For Hammond, he had five assaults on staff by the time he arrived at Jackson four-block. He was constantly on high alert.

“It was a dangerous place to be. When things happen, you don’t see fist fights. I went to the shower with a knife. I carried a knife everywhere,” said Hammond.

He would spend the next several years bouncing around between maximum-security prisons throughout the state. In 1993, he ended up at Michigan Reformatory in Ionia, Michigan.

Smarter than he thought

It was during his time in the psych ward there where he said something “clicked.”

Hammond took the test, and passed. But to his disappointment, he didn’t get any books. In his words: “all I got was a GED.”

But, he soon saw the silver lining.

“Most of my life I was told I was stupid, so getting that GED made me think: maybe I’m not stupid.”

That led to another step. When he left the hole and returned to Reformatory, he took classes through Montcalm Community College and started getting A’s and B’s. He was tracking in the right direction, but shortly thereafter the Pell grant stopped and so did his education.

He started backtracking to his old ways, “and then Warden Pamela Withrow saved my life. Praise God!”

Withrow started a cognitive restructuring program called Strategies for Thinking Productively. As part of the program, each participant has to journal one-on-one with a staff partner.

Hammond recalls the words of Withrow during one of their sessions as mindset-shifting:

“You need to think about what you have available to you in the future. You think you’re going to die here, and you very well may die here, but corrections runs on a pendulum. When the economy is good people are happy to lock you up, when it is bad they look for ways to trim the budget, and it goes back the other way,” remembers Hammond of that conversation.

And then this question from Withrow led to deep reflection:

“Where will you be at in your life when that pendulum swings?”

A decision to change

That decision changed everything. Hammond describes it as life-saving.

“That opened the door for me to one day be in the Calvin Prison Initiative (CPI), or else I would have been back in maximum security, maybe dead,” said Hammond.

Over the next two decades, Hammond would find ways to be a productive member of the society he was in, finding work and jobs, becoming a tutor and a clerk wherever he landed throughout prisons in Michigan. In 2012, he ended up back in Ionia, but a few miles down the road from Reformatory at Handlon Correctional Facility.

It’s there, he encountered the CPI program.

Drawn in by the mission

“I was looking at things different, it was not me vs. the world or the guy next to me. It was what am I doing today to make those around me better?” said Hammond of his new mindset. “So, when I was tutoring, to see someone learn and benefit, that’s what drew me to CPI. It was their mission that we are going to give back, to have an impact on the societies we are part of. I thought here’s an organization that’s going to help me do what I really want to do.”

In 2018, Hammond began as a member of the fourth cohort of CPI. He earned his associate’s degree in faith and community leadership in 2021, and is set to graduate in 2023 with a bachelor’s in business and a focus on human resources.

Upon graduation, Hammond is hoping to get a job where he can influence the hiring practices, especially in companies that hire entry-level. He says he wants to help build systems that allow former inmates to earn a little more pay and gain skills or learn a trade while they are working in entry-level positions. He says it’s about stability.

“To be able to influence something like that would be phenomenal, I have not lost that desire to help those who are going home to not come back [to prison] and rather to impact society. That desire is still here, I’m just doing it from the other side of the fence.”

Something he never imagined was possible until he literally reached the Handlon Correctional Facility parking lot on November 9, 2021.

For the first time in 36 years, Hammond will be home for Christmas.

“I don’t even know today that I deserve this. I can tell you I didn’t earn it. This was an act of God’s mercy,” said Hammond.