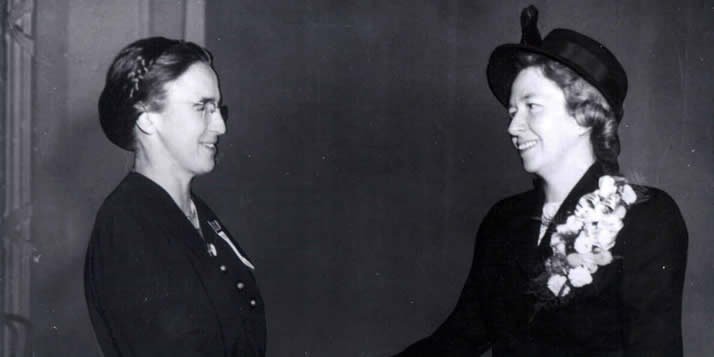 Six years after the United States passed the 19th Amendment as a result of the women’s suffrage movement, Calvin hired its first female faculty member.

“This marks a change in the history of higher education,” said Dick Harms, curator of the college archives. “Throughout the country, more women were attending college. Calvin’s programs in nursing, and teaching drew a growing number of female students—and the administration decided that they, like many other institutions, should hire a dean of women.”

Just three years after graduating from Calvin, in 1926, Johanna Timmer was selected to fill the new position. She was also appointed a member of the faculty, teaching English and German.

“She came to campus eminently qualified to both serve as dean and to teach,” said Harms. Timmer graduated as class valedictorian from Holland High School at age 17 and, after spending a year teaching in New Jersey, attended Calvin and earned a bachelor’s (A.B.) degree.

“I don’t think anyone had reason to dispute her credentials,” Harms said, “but sexism was very prevalent in the 1920s. A number of her male colleagues truly thought she couldn’t do the job simply because she was a woman.”

Timmer, however, soon proved herself to be a formidable presence and a gifted educator, said Harms: “She refused to be marginalized. If someone pushed, she pushed back.”

One of Timmer’s first duties as dean was to write up a college code of conduct for female students. The code contained instructions on attire, curfews, dating policies and household responsibilities. (See sidebar.) Such rules were mandatory for all female students, both on and off campus. Timmer used the policies of other Midwest schools, including the University of Michigan, as a guide to construct Calvin’s code of conduct.

“I think that people often assume that the rules created by Timmer were unusually strict because of Calvin’s Christian foundation,” mused Harms, “but this is very indicative of society at that time … . Timmer had a reputation as a stickler, but I believe she had a great heart for the female students under her care. She wanted to do everything possible to help them succeed.”

Harms described Timmer as bright, articulate and determined. “It’s my impression that she was not a jovial person, but,” he chuckled, “many people weren’t during this time period.”

In addition to her duties as dean of women, Timmer taught classes, wrote articles, gave speeches, earned her master’s (A.M.) degree from the University of Michigan and took graduate courses at two seminaries and a divinity school.

But, as time went by, Timmer’s job started to take a physical toll on her. By 1932 she was suffering from fatigue and stress and, in 1939, was granted a medical leave of absence.

“I think it’s always hardest for the first,” said Harms, “but she approached her role at Calvin with grace and determination. She proved that being a woman had no impact on her ability to do the job well.”

He continued, “I wouldn’t say she was the one who broke down the barrier—it took more than one person to do that—but she was one of the first to start knocking some holes in the wall.”

Timmer resigned from Calvin in 1939 to become the recruiter, dean, acting president and faculty member of the newly-formed Reformed Bible Institute (formerly Reformed Bible College, now Kuyper College) in Grand Rapids. In the years following, she served as principal of a Christian elementary school in Ripon, California and founded a Christian school in Philadelphia, Penn. She is the “Timmer” for whom the Bolt-Heyns-Timmer dormitory is named. She died in 1978 at the age of 77. 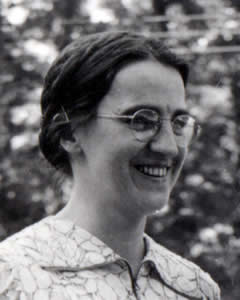