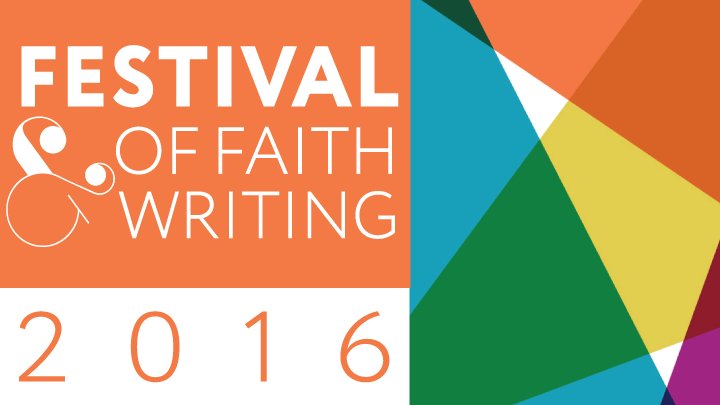 Lisa Ann Cockrel remembers her first visit to Grand Rapids pretty clearly, probably because it marked a turning point in her life.

“It was a magical weekend for me,” said Cockrel. “My head was spinning the whole time with questions and inspiration, listening to people say interesting things for 72 hours. I left that weekend feeling like being part of this conversation is what I want to do with my life.”

That magical weekend was three days at the Festival of Faith and Writing (FFW) and it served as confirmation for her to pursue a career in publishing. Cockrel spent the next 15 years working in that industry in Chicago and in Grand Rapids. And she’s returned to every festival since.

Now, as the biennial Festival of Faith and Writing gets ready to celebrate its 25th anniversary, Cockrel will experience festival from a new perspective—from the director’s chair.

As Cockrel looks ahead to the 2016 festival, she understands she’s inheriting a heritage of excellence and is grateful for the foundation that has been laid. And with that in mind, she says the lineup of speakers for this year “is perhaps the most celebrated group of writers we’ve had together at one time in the history of festival.”

Cockrel says this year’s festival, which runs Thursday through Saturday, April 14-16, 2016, welcoming nearly 2,000 readers, writers and literary enthusiasts, will feature keynote addresses from Zadie Smith, “one of the premiere novelists and essayists of our time,” – one of her novels White Teeth won the 2006 Orange Prize for Fiction; Nadia Bolz-Weber, founding pastor of House for All Sinners and Saints and author of several books; and Tobias Wolff, “a master storyteller” who authored two memoirs, numerous short story collections and novels.

On Friday night Wolff will come back to the stage for a conversation with his former student at Syracuse, George Saunders. Saunders is a recipient of both a MacArthur and a Guggenheim fellowship, and the author of several short story collections, novellas, essays and a children's book.

“The conversations that happen here are a unique delight,” said Cockrel. “We’ll see where that conversation goes … but having the mentor and the star pupil [Wolff and Saunders] on the stage together, talking about their craft is something I’m thrilled to host."

The festival also features dozens of breakout sessions, providing an opportunity for both avid readers and aspiring writers to have conversations about how issues of faith are portrayed in the written word.

Those sessions include Pulitzer Prize-winning authors like Paul Harding, well known poets like Christian Wiman and Mary Ruefle, and lay theologians who write about Christian living like Sarah Bessey.

Cockrel says one of the more intriguing sessions features Patricia and Alana Raybon, a mother and daughter who didn’t talk about their faiths for 10 years after Alana converted from Christianity to Islam. This past year, they co-authored a book Undivided: A Muslim Daughter, Her Christian Mother, Their Path to Peace. Their session will speak into the tension of having interfaith dialogue.

“Hospitality is a core component of the Festival's mission. We create space for people from all different faiths to talk about how their faith intersects with their work,” said Cockrel. “I cannot think of another confessional Christian college that would have the theological resources, intellectual hospitality and cultural vision to host this diverse gathering. There’s nothing like it anywhere else.”

“I think the Reformed mission of Calvin directly speaks to the work of festival, in that we don’t think that there is any area of the earth—or the writing world—that is beyond the reach of God’s grace. And so we can host incredible writers and speakers who don’t profess the same faith as us, and learn about our own faith just the same,” said Bekah Waalkes, a senior literature major at Calvin. “It’s an opportunity for diversity in opinion, and for the rich conversation that comes from that diversity. And Calvin has such a stake in these conversations, as it aims to equip students to be well-rounded, deep-thinking, wholly faithful individuals.”

To that end, Calvin makes it a point to provide numerous leadership opportunities for students prior to and during festival. Waalkes is heading up a festival committee of 35 students representing a variety of majors. The group works with Cockrel in organizing FFW and each student is responsible for hosting one of the authors during their stay. Waalkes is hosting Zadie Smith, whose book On Beauty was the subject of her senior honors thesis.

“We couldn’t do it without them [students],” said Jennifer Holberg, professor of English and co-director of the recently launched Calvin Center for Faith and Writing. She recalls the experiences of past student hosts: “You sat in the green room with Maya Angelou or you picked up Joyce Carol Oates at the airport. You have access. It’s a rare thing for students to have those conversations with these writers. But we think it’s really important.”

Registration for the Festival of Faith and Writing is open through Thursday, April 7, 2016.