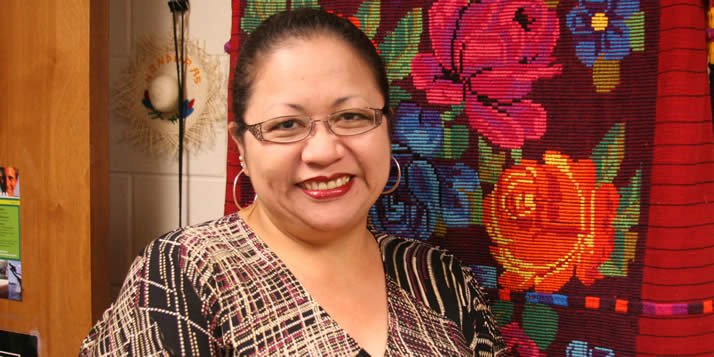 Maria Rodriguez took a leap of faith when she came to the United States.

On August 16, 1996, Calvin Spanish professor Maria Rodriguez stepped off the plane in Grand Rapids, Mich. with two young children and $800 to her name. She had no job, no car and no idea what she was going to do about it. What she did have was unwavering faith in God’s plan.

God had provided for her the first time she came to the United States—although the trip did have its challenges.

Rodriguez, a Honduran, first came to the United States for college in 1986. But before she made the trip, she spent several years struggling to get a visa.

“Visas are only given to wealthy people; I was not wealthy,” she explained.

If God wanted her to go to the United States, she thought, he would open the right door.

And he did. She won a scholarship for Hondurans studying in the United States. It led to the long-awaited visa.

Rodriguez faced another hurdle when she arrived in the United States: learning English. She barely spoke a word of the language when she signed up for the English as a second language (ESL) program at the Grand Rapids Public Schools. But she learned fast.

“It wasn’t hard because I love to talk,” she explained. “There were a lot of refugees from places like Vietnam [in the classes]. I was forced to speak English if I wanted to meet them.”

After just six months in the United States, Rodriguez passed the English proficiency exam and enrolled at Grand Valley State University (GVSU). She would graduate from GVSU with an English and Spanish double major in December of 1989—a semester early.

The reason for the rush: “I wanted to go back to Honduras because I had a boyfriend there.”

Within six months of her return, she was married to that boyfriend and teaching English at a Honduran university.

In 1996, Rodriguez decided to come back to GVSU for a master’s degree in education. She wanted to take her two children with her.

“The challenge was getting my daughter a visa because she was born in Honduras,” she explained.

However, Rodriguez had faith that if the move was in God’s plan, he would provide a visa.

“I said, God, if she gets a visa, I’ll know you want me to be there,” Rodriguez recalled.

Her daughter got the visa.

So even though she had no job, no car and no idea what she was going to do about it, Rodriguez boarded a flight to Grand Rapids, Mich. with two young children and $800 in her pocket.

“[The dean] asked me what I planned to do,” Rodriguez remembered. “I said I didn’t know, and she said, ‘Today’s your lucky day because someone from India just passed on an assistant professorship.’”

Rodriguez interviewed for the job. She got it.

That job provided essential income a few months later when, finding it too difficult to be apart from his family, Rodriguez’s husband, Tito, joined her in the United States. The move cost him his job. Without a U.S. work permit, he couldn’t get another one.

Despite the challenges, Rodriguez and Tito liked Grand Rapids, so Rodriguez decided to accept a full-time position at GVSU upon graduation.

Rodriguez had been at GVSU three years when she saw an opening in the Spanish department at Calvin. A longtime John Calvin fan, she couldn’t resist applying. Calvin offered her the job.

Rodriguez has been teaching Spanish at Calvin ever since.

Her own experience learning English influences her approach: “I do whatever I can to work with students who have a hard time with languages. I’m very flexible in a way, but I’m also very demanding in another. [I say to students], ‘I did it, so you can, too.’”

Outside the classroom, Rodriguez draws on her experiences to help other immigrants navigate the system.

“I help with immigration—filling out papers, helping people know where to go and what to do. A lot of Hispanic people don’t know their rights,” she explained.

Rodriguez is particularly passionate about helping immigrants get an education. She recently guided 22 DREAMers—undocumented immigrants brought to the United States as children—through the process of getting into college.

When she’s not teaching or volunteering, Rodriguez stays busy with her six children—including a set of teenage quadruplets.

The packed schedule is nothing new for Rodriguez. From learning the English language in six months, to graduating college a semester early, she has never been one to waste time.

“I guess that’s just the pattern of my life,” she reflected. “Busy, busy, busy.”

Rodriguez’s father and her husband both come from a Honduran indigenous group called the Lenca people.