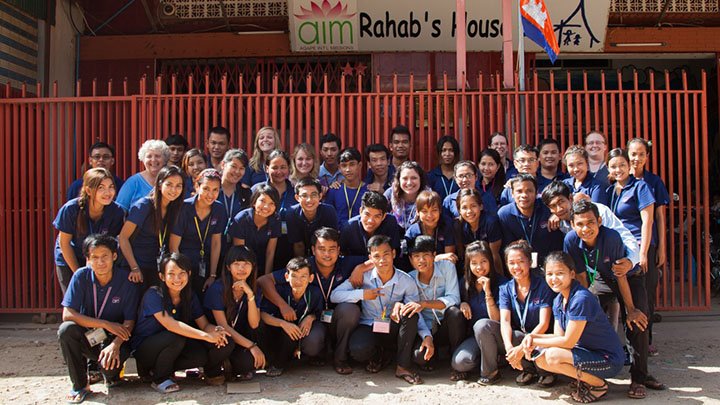 Rachel Meyer ‘06 and her friends Kimberly Hogsett and Becki Sardeson were listening to a sermon in 2008 that addressed human trafficking, unaware that the following week, their journey with human trafficking prevention and intervention would begin.

As teachers at Tianjin International School in Tianjin, China, the three had just begun watching sermons together online. “This was back when trafficking was just starting to have some buzz,” Meyer said. “A week [after watching the sermon], a group of women from an international fellowship said, ‘Hey, we’re starting this group reaching out to women in brothels in our city. We’d love to teach you how in your own neighborhood.’ We thought it was crazy since we had just learned about human trafficking the week before.”

Thus, for the next two years, the three joined the outreach group in locating brothels and praying for those during prayer walks. In July 2010, they took their mission in another direction. After a 14-week road trip through the United States to raise support, the three were headed to Cambodia.

At Rahab’s House, Meyer is the assistant director of student services, where she oversees student-related services and works with three Cambodian social workers who make sure the students have safe home environments.

With 135 kindergarten through fifth grade students for the 2016-2017 school year, the school staff plans to add sixth grade next year and continue growing as a K-6 school. They also hope the school will continue to be a tool of prevention and intervention for the prevalent trafficking issues.

“For us, education is really giving value to kids for their parents, because their parents are a lot less likely to traffick them if they know that their kid has value,” Meyer said. “We’ve really seen the difference that education makes in this community. Our school is really respected.

“Having a background in education and seeing how a really great school was run in China for three years, I’m trying to emulate that in a super poor area with no resources whatsoever, being flexible in that environment and seeing what success looks like,” she added.

Meyer’s go-getter spirit was cultivated at Calvin during her experience with volunteering with the Baxter Community Center for four years and working at the Service-Learning Center for two years, while gaining a liberal arts education.

“Being a well-rounded individual from a liberal arts education has definitely served me well,” Meyer said, as a German, history and secondary education major. “I’ve been able to help others understand the world around them and help expand their worldview. It all starts from having your own worldview that is open and accepting of others, and understanding the basic ideas of reformed theology: people are sinners, but there is hope and we’re called to good service.”

Meyer hopes that her Phnom Penh community will be empowered by their education and that ways of life will be changed from the devastation that this country has endured since the Cambodian genocide. “These kids aren’t going to get stuck in the same cycles of their parents because they can read and write,” she said. “I want to continue quality education in poor communities that don't have access to that otherwise.”