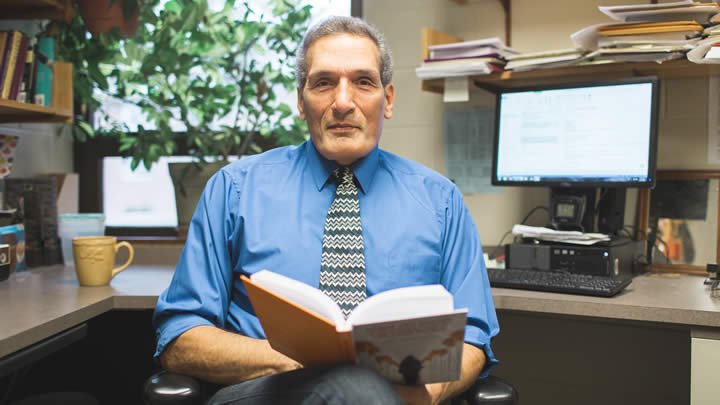 Economics professor Adel Abadeer has taught at Calvin College since 1999.

Imagine for a moment that you live in a place where you cannot ride a bike, you cannot drive, you cannot vote, you cannot leave home without the permission of a guardian, and you cannot act on the most basic self-preservation instincts, because to do so would endanger your family.

This life is a reality for millions of women living in the Arab world. And it needs to stop.

So says Adel Abadeer, Calvin professor of economics and author of the new book, “Norms and Gender Discrimination in the Arab World” (Palgrave Macmillan, October 2015).

The book dives deeply into the cultural forces that shape systemic oppression of women, taking an unflinching look at topics such as violence against women and the economic, political and legal rights of women in Arab countries.

Abadeer says he was motivated to write the book by his deep Christian faith.

“I wanted to give a voice—especially a Christian voice, a saved person’s voice—to the voiceless,” he said. “There’s a verse in the Bible that says to defend the widow and the orphan. The widow and the orphan are symbolic; they’re a symbol for the poor and marginalized population groups in the world.”

So with the help of his research assistant, Lauren De Haan ’15, Abadeer tackled a wide-ranging study of the norms, religious teachings, women’s roles and women’s perspectives from within collectivist societies such as the Arab world.

What is a collectivist society?

“I use the term ‘collectivist society’ to mean where decisions are made collectively,” Abadeer said, “compared to individualist societies, where you make decisions individually."

Abadeer, who is from Egypt, said he chose to focus the book on the Arab world “because the Arab world is a great example of collectivist society. We act as a collective group, religiously, tribally and nationally.”

The prime tenet of collectivism is that the individual must sacrifice her own interest for the good of the whole.

“And in the Arab world,” Abadeer said, “most of the sacrifices are imposed on women.”

In a detailed and eye-opening section of the book, Abadeer describes the practice of female genital mutilation and cutting (FGM/C), which is justified in the Arab world as a way to keep women pure, chaste and faithful to their husbands. The practice is performed on prepubescent girls at the behest of religious leaders, and the price to families who do not comply is severe punishment, even death.

Abadeer explains that FGM/C is in keeping with all of the other restrictions placed on women in the Arab world: Women are the objects, and men are the subjects.

“Her ‘freedom’ or her responsibility is to protect her body and to protect her reputation,” he said. “Men will punish, penalize, guard and constrain many of women’s behaviors to ‘protect.’ And in case of violation of the norm, men will punish the dissenting female.”

This punishment ranges from beatings to honor crimes, where the collective kills a woman, often by poisoning, sometimes by stoning.

In chapter four, Abadeer’s book takes a look at the capability approach, pioneered by economist Amartya Sen and philosopher Martha Nussbaum. It basically states that economic well-being goes beyond an individual’s income.

Being rich in the traditional economic sense is not enough, Abadeer says, unless it comes with freedom to use the wealth as one sees fit.

What can be done?

Abadeer says the way to overcome discrimination in a collectivist society is for more people to speak out against the will of the many.

“We need to hear more voices—some people who are brave enough pay a heavy cost for standing up.”

And for those of us in the West?

“Spend time to understand and read,” he said. “Encourage nongovernment organizations and civil society groups that are truly seeking to liberate women from this gender discrimination.”

Adel Abadeer plans to host a reception for his book “Norms and Gender Discrimination in the Arab World,” at Calvin College in mid-February 2016.