Children’s book invites anyone to explore the Lord’s supper 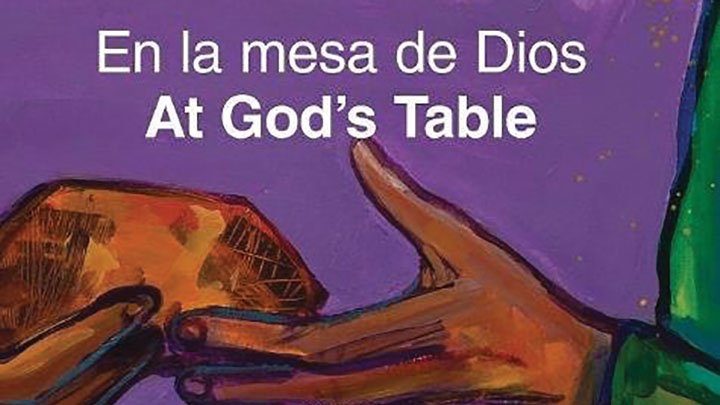 “When I was growing up I had lots of Bible story books, but I had never seen a children’s book on theology or the Lord’s Supper,” said María Cornou, program manager for international and intercultural learning at the Calvin Institute of Christian Worship (CICW). Cornou said she and co-writers, John Witvliet and Carrie Steenwyk, wanted to write a book that intentionally invites children into the discussion surrounding communion.

En la mesa de Dios-At God's Table is a Spanish-English children's book that explores the richly symbolic practice of the Lord's Supper in Christian worshiping communities. This vividly illustrated book celebrates communion as a multifaceted event in a way that, Cornou believes, will appeal to both children and adults alike.

This is the second book published by CICW that introduces theological concepts to children through a biblical understanding. At Your Baptism, authored by Carrie Steenwyk and John Witvliet, unfolds the sacrament of baptism and God’s love for his children.

Cornou explained that this new project was somewhat of a continuation of the previous one. “The first book was only in English,” she said. “But when we approached the second children’s book, we had also grown in our cross-cultural understanding. So, we started working on a bilingual book.”

The book project aligned with the mission of CICW, said Cornou. “The sacraments are very important to the institute,” she said. “As is being generally inclusive of diverse cultures.”

The authors intentionally chose to put the two languages side-by-side rather than in two books. “It was a strategic decision to work more cross-culturally and be more hospitable to other cultures,” said Cornou. “We also wanted to be aware and understanding of the dynamics of many mixed culture families.” Publishing the languages together just made sense, said Cornou.

Cornou said there was a lot of back and forth throughout the writing process. After the English text was written, they began developing the Spanish one, though the process was not as simple as word-for-word translation, said Cornou. “We realized there were lots of translation differences, and we had to make sure it worked within different cultures,” she said. “We really had to rework the text together.”

The En la Mesa de Dios-At God’s Table is filled with beautiful illustrations to accompany the text by local artist Joel Schoon-Tanis. The book also features a “Did you see?” challenge that uses hidden figures to put the story in the context of the whole gospel, and engages a young audience, said Cornou. “When I went to Argentina, I showed the book to my nieces and they loved it,” she said.

“I think the book’s a great resource for including children in communion,” said Cornou. She explained that churches and families will be able to use the book as they like. “We believe that this could be a good resource not just for families but for children’s pastors, Sunday Schools and Christian classrooms.” Cornou suggested that the book could even be used in college-level beginner Spanish courses.

The authors wanted this book to be relevant and engaging for adults as well, said Cornou. “The book could make sense to many audiences, not just children.”