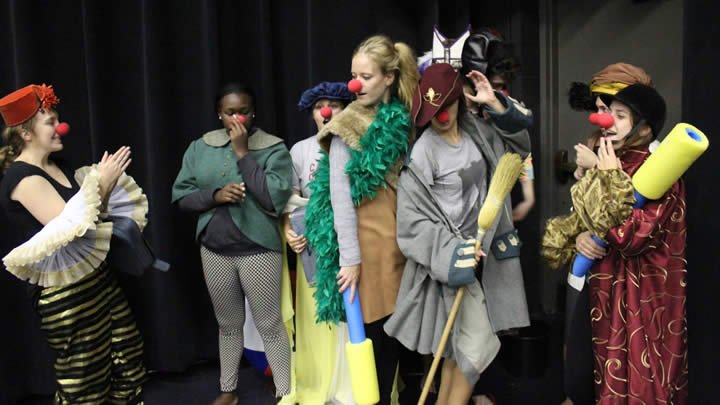 Cast members in the upcoming production of “King Lear” practice clowning during a recent workshop. (Photo courtesy of Carlie Bergsma)

For its 2015-16 season, Calvin Theatre Company has elected to explore the light and dark sides of Shakespeare, beginning with a clownish twist on “King Lear.”

“It’s the 400th anniversary of Shakespeare’s death this year,” said Stephanie Sandberg, professor of communication arts and sciences. “I wanted to do something to celebrate that and think about what he’s brought into culture.”

So, Sandberg wrote an adaptation of “King Lear” that explores the tension between comedy and tragedy—using clowns. The opening scene will reveal a troupe of clown performers who discover a box that contains the script to “Lear,” which they then will act out using props and costumes.

“King Lear” is about an old king on the brink of madness who decides to divide his kingdom among his daughters, giving the largest portion to the one who loves him most. When his youngest daughter fails to express her love to his satisfaction, he disowns her, setting in motion the events of the play.

Sandberg said the clowns will represent the human condition and will be present throughout the play.

“We’re doing it in the style of the white clown, which is a French kind of clowning,” Sandberg said. “We brought in an expert to train us in clowns. It’s a very interesting concept that I’ve been thinking about for a long time.”

“Who thinks of ‘King Lear’ with clowns?” asked Emily Wetzel, a senior theater major and member of CTC. “Stephanie Sandberg does.”

Sandberg said the clown idea, in keeping with the theme of dark and light, was meant to strike a balance with the suffering that makes “King Lear” so heavy, without downplaying the serious subject matter.

“I want it to be very entertaining,” she said. “Oftentimes, ‘Lear’ is so bleak that people don’t consider it entertainment. Because we’re bringing this clown style to it, I think it’s very entertaining as well.”

“It’s very entertaining but it’s also enlightening,” Sandberg said. “Comedy comes out of the human condition. Out of laughing at ourselves during trouble. That’s what makes something funny is the trouble in it.”

Wetzel, who will play King Lear’s eldest daughter Goneril, said she is interested to see how the balance between light and dark will play out.

“I think the biggest challenge for me is finding that balance between the humor of the clown and the despair of the story,” Wetzel said. “Because it would be really easy to go one way or another, to make it all about the clowning, or all about Lear.”

“One of the reasons [Sandberg] chose ‘King Lear’ is because it deals a lot with really deep issues of sorrow and grief and the human condition,” Wetzel said.

During interim, Calvin will put on a play called “You Make a Difference,” written and directed by Debra Freeberg, professor of communication arts and sciences.

The play is an entertaining, educational piece about three friends who are bullied in school but who rise above with a small band of supporters and a “You Make a Difference” campaign.

Freeberg also will direct Shakespeare’s comedy “Love’s Labour’s Lost,” with a surprising twist: The production is set in the northern backwoods of Alaska.

Tickets for all concerts may be purchased online, in person at the Calvin Box Office or by calling 616-526-6282.