Remembered for his ability to challenge and attract students to the Classics field of study, Robert Otten ’49 died on Dec. 9 at the age of 92. The Classics professor emeritus began teaching in the department at Calvin in 1952 and retired in 1987. During his 35-year tenure at Calvin he was known for his adeptness in challenging and motivating highly gifted students.

“Bob was at his best in discovering and developing the special interests and talents of students, students whose careers he often continued to follow and encourage and show interest in well after their graduation,” said former student and Calvin colleague Rich Wevers.

Among those students influenced by Otten was Ray Van Dam '71, professor of Roman history at the University of Michigan. “Professor Otten was a wonderful teacher of Latin and Greek, meticulous and exacting, but also inspirational,” he said. “His students worked hard because he worked even harder on their behalf. Some of his students still remember the extensive grammatical commentaries he wrote during his summer vacation to help us read Plato's Symposium or Augustine's sermons.”

Throughout his three-plus decades at Calvin, Otten taught all levels of Latin and Greek. His research included the study of Christian personages and their writings.

“He was an exacting and challenging teacher beneath whose sometimes stern exterior lay a personal warmth and generosity of spirit that drew many of us into the same love for classical literature and art that he modeled,” said Ken Bratt, also a former student and colleague of Otten.

Otten first came to Calvin as a student in the mid-1940s, after a three-year tour of duty in World War II as a fire control sergeant in the artillery. He then earned his PhD in classical languages from the University of Michigan.

He was the first in the department to teach Greek poetry of the Orthodox tradition, such as that of poet and hymn writer Romanos, and explore the persistence of classical themes in Byzantine art.

He continued his studies well into retirement, where he focused on art and literature from the 15th to 17th centuries. His love of classics also extended to music, which he enjoyed playing on the violin and cello.

“After his retirement Professor Otten took great delight in hearing about the achievements of his former students and reading their books,” said Van Dam.

“As a mentor and colleague, Bob was a learned friend whose versatility and devotion to Christian liberal arts enriched our lives and those of Calvin students over the 35 years of his teaching, and beyond,” added Bratt. 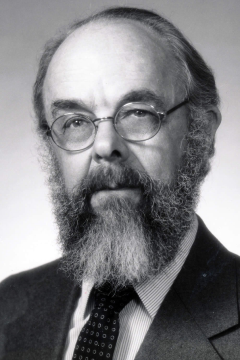 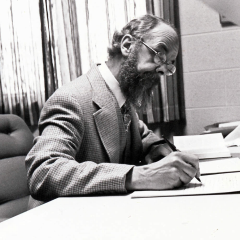 Robert Otten at his desk.