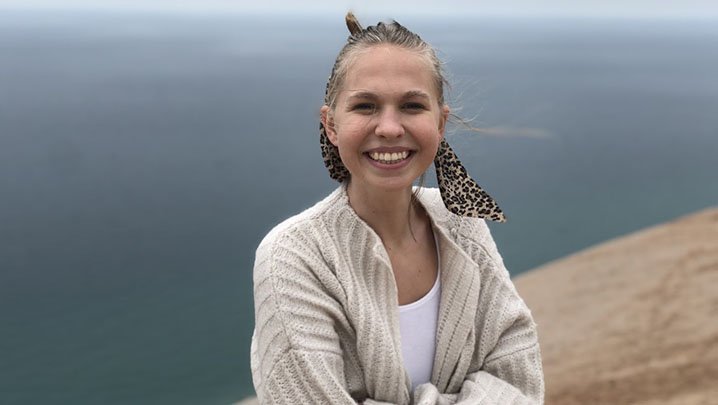 Every morning when my alarm went off, I would look down and Olivia would be doing her devotions,” said Anna Sytsema, who was Olivia’s roommate this year at Calvin. “Even in the midst of the chaos and the pain, she was devoted to the Lord and shined God’s light toward everyone who met her.”

During those three years, her disease did not define her.

“In class, I will remember her more for what she didn’t say than for what she did,” said Kate Van Liere, professor of history. “She never said a word about her illness.”

“She never complained about it. In fact, she rarely talked about it,” said Sadie Kornoelje, a first-year student at Calvin who was Olivia’s lab partner at Grand Rapids Christian High School when she learned of her cancer diagnosis. “To her, her treatments were just another thing to cross off the to-do list as she completed her homework, worked as team manager on the soccer team, and became a Peer Listener.”

It wasn’t that Olivia was shirking reality. It was that she was embracing a much greater reality. She knew who she was and whom she belonged to. And that confidence inspired everyone she met.

“Olivia lived her life with purpose,” said Sytsema, “and nothing was going to take that mindset away from her.”

And her understanding of her purpose translated into an unparalleled resilience and perseverance: seeing every day as a gift.

“Although we met only a couple of times, I will never forget Olivia’s hope-filled optimism and enthusiasm for life,” said David Koetje, Olivia’s academic advisor at Calvin. “At our last meeting she was making plans to return as a full-time honors student in the spring semester, which was downright audacious given her health struggles.”

“Whether or not she was really confident about beating the disease, there was no doubt about her confidence that she was in God’s hands and that he would take care of her. That sense of trust and faith really inspired me,” said Van Liere.

“During our junior year of high school, Olivia was involved in AP classes, National Honors Society, and rest prep while going to chemotherapy and radiation almost every week. She never let her school work or friendships slide because of her circumstances. This is the thing I will remember most about her,” said Carson Warners, a first-year Calvin student who became friends with Olivia his freshman year of high school.

A deep love for others

Olivia saw every day as a gift, gave each day her whole heart, and found joy in everything.

“Olivia loved every living thing … like I mean every single living thing. She would always get really mad at me or one of our friends if they killed a spider or any other bug in the house,” said Warners.

And that love ran far deeper for those she called friends.

“She was the person that I went to first whenever I had an issue to talk about or a sudden life crisis. She was my person,” said Warners.

“As long as I’ve known her, she has been the most positive, joyful, and thoughtful friend I’ve ever known,” said Hannah Rusticus, a first-year Calvin student who was a close friend of Olivia’s since elementary school. “She was the person who could always make me feel better on the worst days because she had the warmest smile and always knew what to say.”

“She always was looking out for everyone else, always asking how you were doing before she thought about herself,” said Kornoelje.

“She had hope until the very end, transitioning from hoping for miracles and a life on earth, to hoping and longing for eternal life with Jesus,” said Sytsema.

Olivia knew she was in God’s hands and that inspired her life, and her friends were comforted by a reminder of his providence the morning after her death.

“Upon hearing before Monday’s class the news of her death, I knew that I had to find something meaningful for our Honors 150 devotions,” said Koetje, about the class he was teaching during interim that Olivia was supposed to be in. “Turning to the devotional book published by the Calvin Alumni Association in 2000, I looked up the entry for January 26 – the day of Olivia’s death. Incredibly, the title of the devotion for that day was “In God’s Hands” and was written by Bill Haverkamp, Olivia’s grandfather!  After reading the words that Bill wrote, even before Olivia’s birth, I knew that I needed to share them with the class. The image of God’s children engraved in God’s hands is a source of our greatest comfort – maybe especially in times like these.”

The evidence leaves no shadow of a doubt that Olivia’s life lived out that command Jesus gave to his disciples.

“She loved the Lord with her whole heart, and everyone could tell by the way she treated people and by her consistent joy,” said Rusticus.

“Kindness was her defining characteristic,” added her dad, Brad Haverkamp.

“She inspired so many people,” said Kornoelje, “and her story will continue to be an inspiration for all.”

Olivia is survived by her parents Brad and Cindy (Folkert) Haverkamp; sisters Caroline and Maria Haverkamp; grandmother, Carol Folkert and grandparents, William and Marybeth Haverkamp; along with many aunts, uncles, and cousins. Visitation will be held at Eastern Avenue Christian Reformed Church (514 Eastern Ave SE, Grand Rapids, MI) on Friday, January 31, from 2-4 p.m. and 6-8 p.m. A funeral service will be held at the same location on Saturday, February 1, at 3 p.m. Memorial contributions may be made to the Grand Rapids Christian School Association. 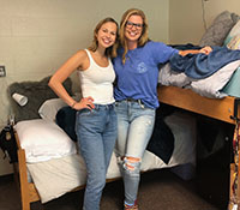 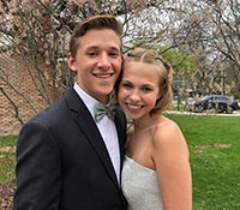 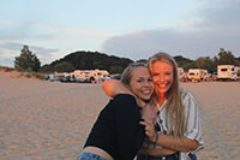 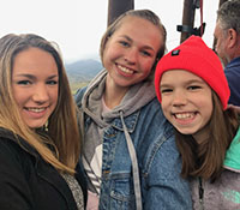 Olivia with her sisters Caroline and Maria

“Olivia was an amazing student, daughter, sister, friend and child of God. Her application to the Calvin/ University of Michigan Scholar Program held her voice on love, life, learning and service. Olivia planned on going to medical school. Her joy was palpable as she described her plans for the future. She was thrilled to be learning at Calvin and starting her own journey toward medical school. My words cannot begin to describe her, but I believe that her own words say it fully!” said Teri Crumb, Calvin’s pre-health professions advising coordinator:

“Finding joy in everyday has become a top priority in my life over the past couple of years. My love for school is rooted in the exploration created in an environment of learning that has always made academics invigorating. This passion motivates me to achieve higher and dig deeper into the material. I find joy in everyday life in simply being given another day to honor God through my actions on earth. Rather than dreading the unknown, I live in the pleasure of knowing that I am living out God’s purpose for my life.”

“The complexity, innovation, and potential for discovery within the subject (biology), are the same attributes which attract me to the medical field. I love school, and I love learning, which are crucial characteristics for anyone planning on enduring the level of education it takes to become a physician. My passion for education and biology is equaled by my passion for serving others.”

“My primary oncologist has taught me what it means to be the hands and feet of Christ on earth. Every visit to the hospital, he prays over me and asks for wisdom and guidance from God. He uses his career to honor the Lord, and there is nothing I desire more than to be able to do the same. Being a doctor is not about the money or respect or power, it is about using that position to build the kingdom of God.”