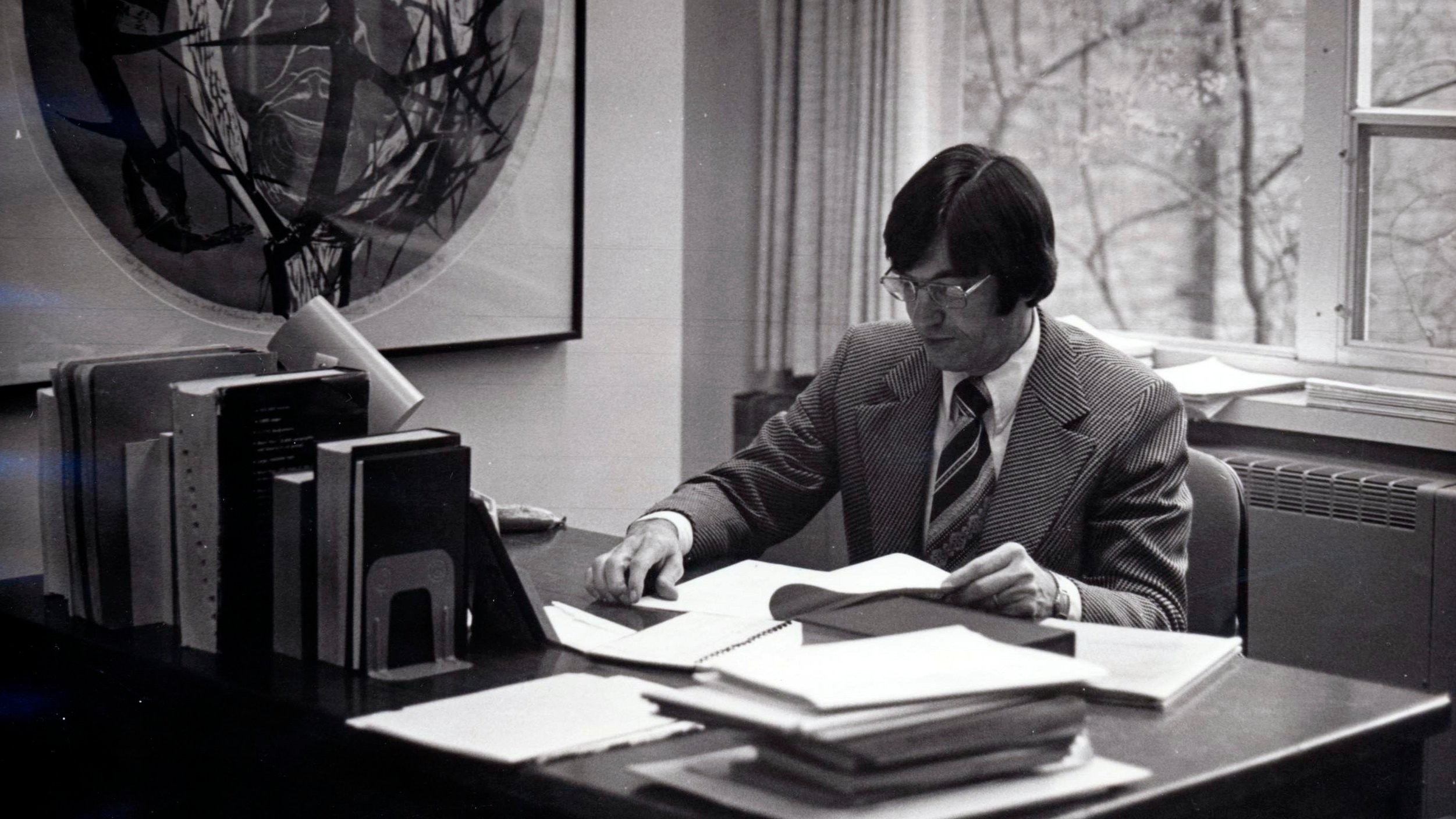 Prior to coming to Calvin College as a professor in 1964, Leonard Sweetman Jr. had been a pastor and a missionary in Japan. But it was the quarter of a century that Sweetman spent as a professor of religion at his alma mater that was the best part of his career said his son Bob Sweetman, the H. Evan Runner chair in the history of philosophy at the Institute for Christian Studies in Toronto.

"He loved Calvin," said Sweetman of his father, who passed away on July 31, 2016 after several years struggling with the effects of Parkinson's Disease and dementia. "He pinched himself every day that he got to be at Calvin. They gave him a chance; they gave him a home, a work home. He felt like his work at Calvin was what he was put on this earth to do."

Bob Sweetman added that throughout his career, Leonard Sweetman had a deep conviction that his church and his college should mirror the justice and peace of the Lord they existed to serve.

"He consistently walked the talk," he said, "participating in small but real ways in the civil rights and anti-war movements in the '60s, the anti-apartheid movement of the black South African clerics he met in the '70s and '80s, and finally throughout his career by the anything-but-small heart he showed for so many Calvin College students he met struggling to find new ways to be people of faith."

A retirement tribute written in 1989 to mark the end of his formal Calvin career said that Sweetman commanded wide respect among his colleagues and students as "a careful scholar and demanding teacher, always meticulously prepared and sometimes intimidating, for he requires of others the same standards of excellence he imposes upon himself."

Though Sweetman's academic career was marked by eclectic interests, it was consistently grounded in the Reformed faith which had been part of his life since his birth and childhood in Paterson, New Jersey and nurtured during his time as an undergrad, a graduate student and a Calvin professor. He wrote, for example, on the gifts of the Holy Spirit and John Calvin, and he partnered on a 1984 book with Allan Boesak, a South African cleric and politician, called "Black and Reformed: Apartheid, Liberation, and the Calvinist Tradition." That book transformed speeches of Boesak into literary essays and was, said the aforementioned retirement tribute, "a reflection of Len's own deep compassion and concern for the oppressed and downtrodden."

In retirement he stayed active with a variety of academic and more popular publishing projects. He both translated letters for and read early manuscripts of "Dutch American Voices: Letters From the United States, 1850-1930." The book, published in 1995, draws from the many letters that are part of the Dutch Immigrant Letter Collection at Calvin College.

Through that project, and several others, Richard Harms, the Calvin archivist, got to know Sweetman pretty well, and he noted that in personality and temperment, Sweetman daily lived up to his surname. "He was a gentle person," said Harms, "a Christian scholar."

Sweetman graduated from Calvin College in 1948, attending on the G.I. Bill, and then Calvin Seminary in 1951. Over the years, he received additional formal education at Union and Hartford seminaries, and at the Free University in Amsterdam. Prior to coming to Calvin he served as a pastor in Conrad, Montana and then spent five years, with his wife Clara, as missionaries in Japan. He returned to the U.S. for one more pastorate and then came to Calvin in 1964, serving a quarter of a century with areas of expertise being the New Testament, Missiology and World Religions before his retirement. At the college he was a charter member of the Multicultural Lectureship Committee, chaired the college's library committee for several years, was a member of the governing board of the Meeter Center and was twice elected by his colleagues to the Committee on Committees.

A memorial service will be held at Church of the Servant (3835 Burton St. SE, Grand Rapids, Michigan) on Tuesday, August 23 at 2 p.m. In lieu of flowers, the family has asked that donations be made to Calvin College, which Leonard was ever so proud to serve.