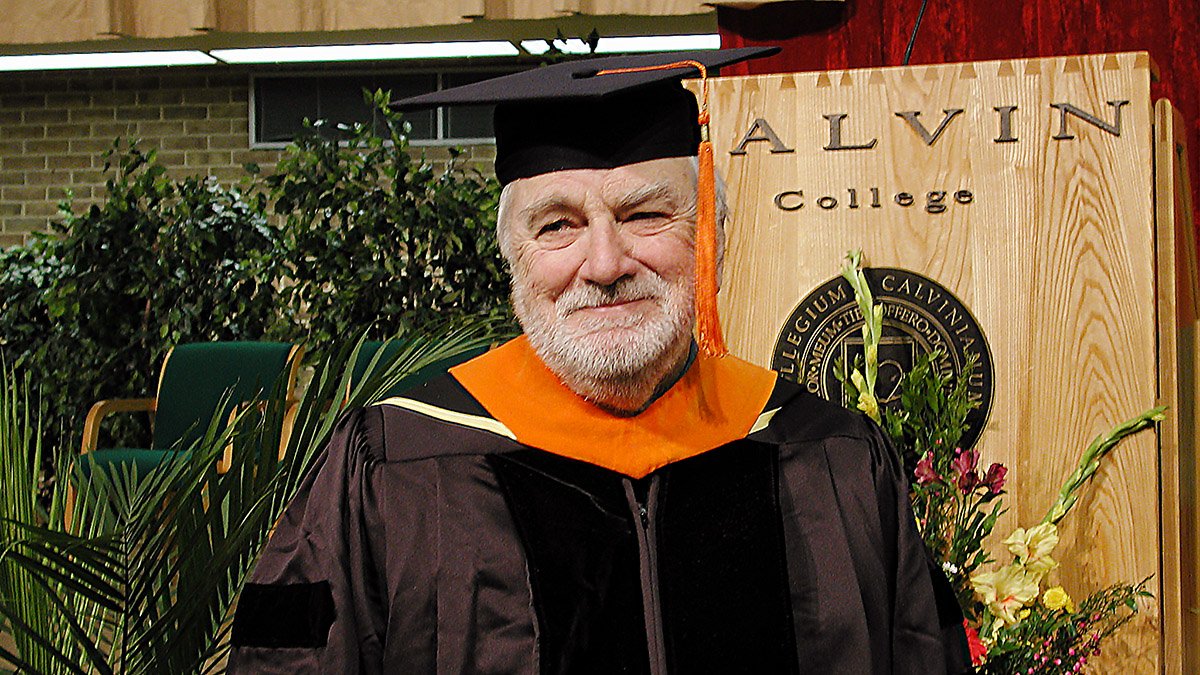 Jack Kuipers was named a Distinguished Alumnus of Calvin in 2002.

To know the impact of Jack Kuipers the researcher one need only peruse the reviews on amazon.com of his 1999 book Quaternions and Rotation Sequences: A Primer with Applications to Orbits, Aerospace, and Virtual Reality. Perhaps the title alone is signal enough of Kuiper's deep intellect, but the book's 22 reviews, with an average of 4.8 out of five stars, speak of both its remarkable depth and also its accessibility.

Wrote one reviewer: "This book is one of the very few mathematical, engineering, physics texts that I have come across in my 37-year career that stands out as a classic to be ... I want to personally thank the author for taking the time and pains to write his book for me and countless others who stumble around in the world of physics, mathematics and engineering trying to get a grasp on our massive field. His contribution shines."

Another reviewer added: "I'm leader of a small group of engineers working in the area of air flight vehicles particularly those that are unmanned. Our primary interest is flight control but more recently inertial navigation. Had a background in maths obviously but quaternions had always been a bit scary. Have bought several books on quaternions from Amazon but this one is by far the best. It is easy to read and particularly like the 'fact box' approach using the page margins."

Those comments come as no surprise to those who knew Kuipers the researcher and Kuipers the teacher, including his colleagues at Calvin, from which he retired in 1986 after a distinguished career at his alma mater as a professor of mathematics.

A brilliant mind and master teacher

Kuipers died on April 27, 2016, at the age of 95, and his former colleagues and friends remember him as both a brilliant mind and a master teacher.

Randall Pruim, current chair of the Calvin mathematics department, said: "Jack was the first faculty member I met at Calvin, when I was still a high school student. I sat in on his calculus class and distinctly remember the incredible drawing he made on the chalkboard to illustrate surfaces of revolution. I never had him for a professor when I was a student at Calvin, but I remember having a class in a room the hour after he taught and seeing those same beautiful drawings every day."

Such drawings also played a key role in Kuipers' quaternions book (quaternions go back to the 1800s and are still used today in both theoretical and applied mathematics, including in computer graphics). When Kuipers won Calvin's Distinguished Alumni Award in 2002 (he is a 1942 graduate of Calvin), a profile in Spark, the alumni magazine, noted that he spent 10 years typing every word of the 384-page book and drew all 121 diagrams.

"Not only did the mathematics have to be right," he said, "it had to look right.  Sometimes he spent weeks perfecting one graph.  He agonized over the size of the margins. The result is a book that reviewers call beautiful as well as useful."

For the most part Kuipers downplayed that remarkable achievement. Of the book he once said, with no trace of rancor nor hubris: "People have written about quaternions before, but a lot of what has been written is not very palatable. I'm an applied person, not a theoretician. That's what makes this book different."

That desire to do things differently, said those who knew Kuipers, was rooted in his career before coming to Calvin in 1966.

After graduating from Calvin, and after a stint serving his country in the European theater, he worked for almost 20 years in industrial engineering, including developing complex weapons systems for the U.S. Air Force during the Cold War.

That experience, the 2002 Spark profile noted, with its talk of "kill ratios" and "kill efficiency" led Kuipers to return to academia and his alma mater in 1966. "I needed to get away from that," he recalled. "I had been moving in circles that I never wanted to get familiar with."

His work in the 1950s, however, also led many to consider Kuipers the father of virtual reality. During that decade he began experimenting with the mathematics used to produce simulations for air force pilots, developing a six-dimensional graphics system which became widely used in the aerospace, defense and entertainment industries.

In addition to his Calvin degree, Kuipers went on to earn three additional degrees from the University of Michigan and is the holder of several patents in both the U.S. and other countries. Yet, Kuipers always remained humble about his role as researcher, teacher and author.

"Much as he loved a good discussion on deep issues," said Stob, "he was very careful to express his opinions tentatively, if at all.  He was unfailingly charitable to the views of others."

Indeed, a comment in his 2002 Spark profile encapsulated his approach to life and serves too as an appropriate epitaph in his death.

"It’s fun and often beautiful to work things out and see how they all fit together," he said. "I see much beauty in mathematics. Yet, much of what I see around me is pure mystery. We live very presumptuously—we think we understand things, and in some limited, often pious sense we do, but when pressed we do not."

A memorial service will be held Saturday, May 7, at the Raybrook Chapel, 2121 Raybrook St. SE, Grand Rapids, Michigan.  Visitation will begin at 10 a.m. with the service at 11 and a luncheon following.