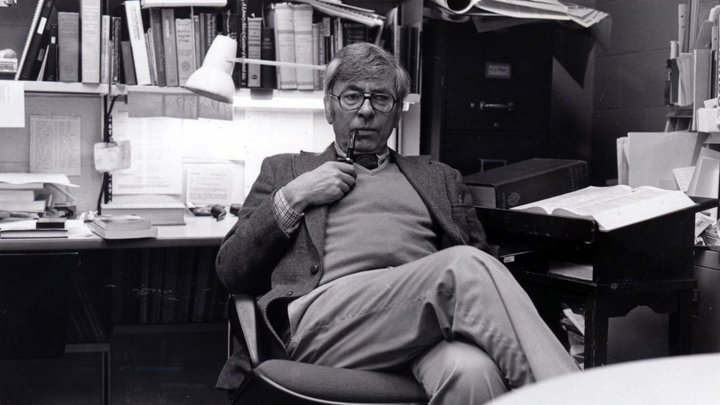 “A college institution” are the words used to describe George “Tom” Harper upon his retirement from Calvin in 1989. He served the college as an English professor for 37 years, from 1952-1989. Following his retirement, he could often be found in the Emeritorium, the room frequented by other Calvin retirees, discussing the issues of the day.

Harper died on May 10, after a brief illness.

During his nearly four-decade tenure he taught courses in Victorian literature and Shakespeare, as well as rhetoric and introduction to literature; his interim courses were focused on topics such as detective writing and James Joyce.

“Tom is perhaps the last of the older breed of faculty mavericks who did their academic tasks well but were also tone-setters, keeping in touch with what was going on and in many informal ways making their mark on the college,” said former colleague Clarence Walhout, at the time of Harper’s retirement.

Beyond English, Harper just knew a lot; he was wise.

“He could entertain his colleagues with endless stories around the lunchroom table and also cultivate by his example the love of books and the scholarly life. His general knowledge was vast, and his memory was detailed,” said Walhout. “I remember once when he spoke at length about various cacti in the southwest. Afterward I said, ‘Tom, how do you remember all of this stuff?’ He replied, ‘I spent several months in the southwest during my army years, and you just don’t forget these things.’”

“He knew the most obscure things about certain topics,” confirmed Conrad Bult, a fellow member of the Emeritorium.

He regaled others with his detailed accounts of people and places.

“What I most loved about Tom was his extraordinary memory and that every memory opened a cache of stories,” recalled Dean Ward, another former colleague. “We'd be talking about York, England (a place we both loved), and he'd say, "you must go to Fountains Abbey"; then he'd get a wicked twinkle in his eye and add, "you've heard the story of the monk at Fountains ... ." And off he'd go with a half dozen stories. Once or twice--when I thought he'd taken some creative license with, say, a story about an old CRC minister--I fact checked him. Turned out that it was his most outrageous stories that were most dead-on accurate.”

His friends from the Emeritorium remembered his sense of humor: “He loved a good play on words,” said religion professor emeritus John Primus. “He liked puns and that sort of thing,” added Rich Wevers, emeritus classics professor.

In fact, one of Harper’s preferred assignments was a stint on the committee that helped establish Calvin’s Ecosystem Preserve. “He, for a long-time, has been a strong advocate for protecting trees on campus and passing along some of those stories,” said biology professor Dave Warners, in a previous story about Harper.

Yet, to those who knew him well, Harper was most cherished as a friend.

'Tom was a great storyteller with a marvelous capacity for detailed recall,” said former colleague Henry Baron. “But it was at our lunch dates that I felt in touch with another side of Tom--his heart's caring for those around him who suffered. It was almost as if the burdens of others were his, too.  He really cared.

"I loved him for that, and he made me the better for it. I will always be grateful for Tom Harper in my life; I will always miss him."

“Tom Harper cultivated an academic image, often infused with a British style, and at times he played the role of a curmudgeon, but at heart he was a friendly, generous, helpful and humane person,” said Walhout.

“Tom was witty, wise, generous, and as good-hearted as anyone God ever made,” added Ward.

Harper is survived by his wife, Elaine; children: Samuel and Karla Harper, Amelia and Clark Griffin and Katherine and Dan Hawkins, and four grandchildren.

A memorial service will be held at Calvin Christian Reformed Church in Grand Rapids on Friday, May 20, at 2 p.m. with visitation on Thursday, May 19, from 4 to 6 p.m. and Friday one hour before the service. 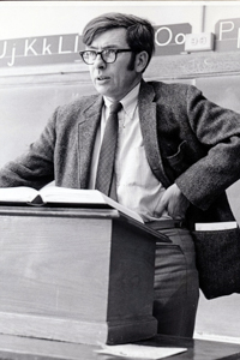 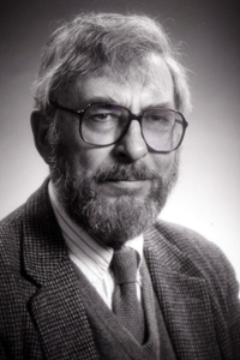