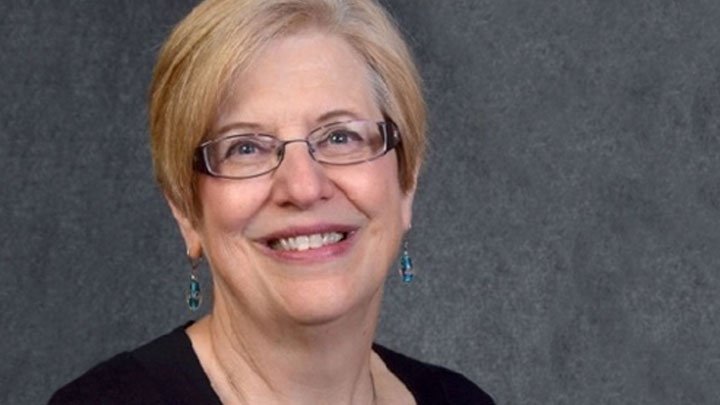 “Her love of God was at the center of everything that she did at Calvin,” said Bob Berkhof, who worked with Meyering for almost 30 years, most closely as a colleague of hers in the president’s office.

Meyering served at Calvin for 32 years. She died on Tuesday, March 23 following a brief battle with Myeloid Leukemia. While Meyering’s roles and offices changed a few times during her time at Calvin, working in the music department, alumni relations office, and then in the office of the president, she remained consistent. Her colleagues from every square inch of campus describe her as being extremely welcoming, overflowing with joy, gifted yet humble, and as someone who sought to do everything with excellence.

Meyering poured everything she had into the lives of the people around her. It’s because she took the second commandment Jesus gave just as seriously: “Love your neighbor as yourself.”

“She was always grateful for the life and love God had given her,” said Louise Schreur, who worked with Meyering for almost a decade in the president’s office. “And, in turn, she was a blessing to all who knew her.

“I believe there would be many who would describe her as “Jesus with skin on” for the ways she cared for others,” said Sharolyn Christians, who began her work in the Office of the President in 2001, the same year Darlene did.

“You were in good and caring and entertaining company when you were near Darlene,” added Mike Van Denend, who worked alongside Darlene in the alumni relations office for many years. “Her voice—whether singing, speaking, or laughing—had a way of welcoming you into the moment.”

She was a welcoming presence, no doubt. And she was also extremely gifted. Sometimes those gifts were seen on stage, through performing in Calvin’s Theater Company, singing in the Alumni Choir, or interviewing authors at the Festival of Faith and Writing. But, more often that not, you’d find Meyering in a backstage role, using her gifts to help others shine.

“Darlene was one of Calvin’s behind-the-scenes heroes, who also thrived on the main stage,” said John Witvliet who knew Meyering when he was a student in the 1980s and then as a colleague years later. “She pulled off organizing dozens of remarkable tours, concerts, conferences, and board of trustee meetings—including landmark DeVos Hall Oratorio Society concerts, Artist Series events like the Moses Hogan Singers and the Japan Bach Collegium, and retirement celebrations for Calvin Presidents Anthony Diekema and Gaylen Byker.”

“Her collaborative spirit and resourcefulness brought to fruition many other endeavors that connected Calvin with the larger world,” said Pearl Shangkuan, director of choral activities at Calvin.

Shangkuan says Meyering was on the search committee that brought her to Calvin, and the two worked closely together on the Calvin Alumni Choir for many years.

“Darlene loved the music faculty and students and had a vision for programs that would showcase them as performers,” said Gaylen Byker, president emeritus of Calvin University. “She also worked tirelessly to bring top performers to campus for the entire West Michigan community to enjoy.”

“She was always full of new ideas. She did her job with great gusto!” added Berkhof.

“Dar was genuine, full of life and always grateful to her Savior who was the source of the joy found in her,” said Van Denend. “I’ve never met a person who was better able to channel that joy and gratitude into such creative service for the Lord and to others.”

And it wasn’t just in the final polished productions where Meyering’s work elicited a joyful response, but in the creative process as well.

“Darlene and Randy Buursma were instrumental in the Airband performances of Gaylen Byker in the mid-2000s. Perfecting the performance required many, many rehearsals that produced much laughter from behind the closed doors of the President’s Office,” said Christians.

“She was so good at it all both because she cared deeply about the deep spiritual significance of Calvin’s mission and because of her verve and contagious laughter,” said Witvliet.

Meyering saw her work at Calvin as missional. And because of this, she had very high standards for excellence.

“She was always aware that this work was a service to the Lord, and she took that to mean a sacred trust and duty—not cutting corners, a striving for excellence, an offering to God,” said Van Denend.

“She gave her all in whatever she did,” said Schreur, who said whenever she asked you to do a task, she simply expected you to do your best and make Calvin look good. And “she always gave credit where credit was due.”

She embodied humility. “She was interested in the cause rather than the praise,” said Van Denend.

“Darlene was totally committed to the college and its Christian liberal arts mission,” said Byker. “She brought the best of Christian faith to everything she did in both practical and creative ways.”

“Darlene’s faith permeated every aspect of her life and work. One can’t miss it whether you knew her little or well,” said Shangkuan. “It was a deep, abiding faith in both word and deed.”

“She always had a song in her heart, and that song was beautiful, powerful, soul-stirring, and a reflection of the sincere gratefulness of a blessed child of the Heavenly Father,” said Van Denend.

“I have said to several people that I am very sure she is singing in the choir in heaven,” said Schreur, “but I am also sure that she is making God laugh.”

Meyering is survived by her husband of 52 years, Bob Meyering, who also was a longtime staff member at Calvin. She is also survived by their three children, Jeremy Meyering, Jason (Meredith Rooze) Meyering, Rachel (Louis) Najar, five grandchildren, and numerous nieces and nephews. Visitation will take place on Sunday, March 28, from 1-4 p.m. at the Covenant Fine Arts Center at Calvin University. The funeral service will follow at 4:30 p.m. and is also available via livestream. In lieu of flowers, those wishing to offer expressions of sympathy are encouraged by the family to make a memorial donation, in honor of Darlene Meyering, to the Calvin Alumni Choir of Calvin University.