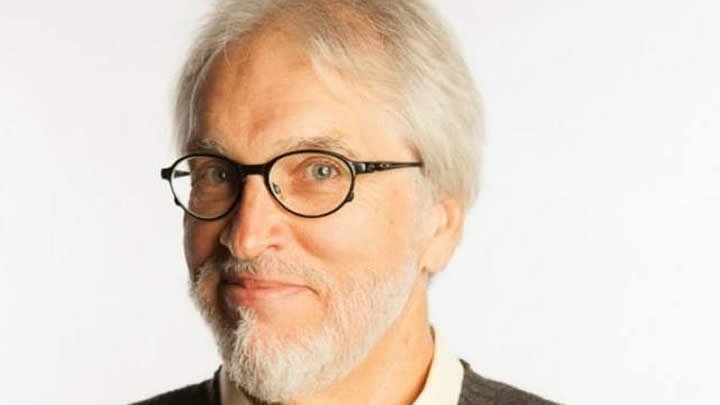 He had a love for literary study, a passion for teaching and a wicked sense of humor. He was a good listener, a fierce competitor and a tenderhearted man.

These are just a handful of the ways those in the Calvin English department are remembering their longtime colleague Dale Brown, 65, who died on Friday, Oct. 10 in Bristol, Tenn. from injuries he suffered following a bicycle accident earlier in the week.

“We’ll really miss him. And we are brokenhearted for his family and the community at King [University]. It’s a hard thing,” said Jane Zwart, English professor at Calvin.

“He was a sweet, comical, gentle man … what a fine, good, interesting human being he was, to me and to my family,” said James Vanden Bosch, English professor at Calvin.

“He cared a lot about students and their wellbeing. He had a pastoral quality to him and helped me think carefully about students as whole people,” said Karen Saupe, English professor at Calvin.

While Brown left Calvin College in 2007 to move closer to family and to found the Buechner Institute at King University in Bristol, Tenn., he kept strong ties to the Calvin community, which he served for two decades.

Zwart had the opportunity to learn from Brown both as his student and colleague at Calvin. She says he was incredibly inspiring and had a knack for drawing out students’ potential.

“He saw in other people the things that they could accomplish before they saw them in themselves,” said Zwart. “He was an amazing person at kind of turning the course of people’s lives, making them braver, making them more generous.

“I won’t say that if it hadn’t been for Dale I wouldn’t have been a professor. But, I never would have done it with the same passion or clearness of vision,” she added.

Adding voices to the conversation

Brown’s influence at Calvin stretched well beyond the students he served, and the colleagues he served alongside, to literary enthusiasts around the world. One of the most far reaching things he did at Calvin was help in shaping the vision for the college’s Festival of Faith and Writing that brings together 2,000 readers, writers and literary enthusiasts from around the world every two years to talk about the intersection of faith and writing.

“That intersection between what literature does and what faith means, that whole area was important to him throughout his career,” said Zwart. “To introduce people to the way literature can both affirm and challenge our faith and to introduce a wide group of people to that, not just the academic crowd, but also people who were more lay readers, that was hugely important to him.”

And it was something to which he dedicated his life’s work. In starting the Buechner Institute, Brown intentionally brought people together to have deep conversations around the intersection of faith and culture.

Living out a clear mission

“He always saw faith as compelling us to action for one another,” said Karen Saupe, who worked with Brown from 12 years. “He encouraged people to ask hard questions about their faith and not to easily accept everything. He thought Scripture should challenge us too.”

Saupe said one of the quotes Brown often referenced was “A book must be an ice axe to break the sea frozen inside us,” by Franz Kafka, a prominent 20th-century fiction writer.

“That’s why he taught. That’s why he did what he did at Calvin and the Buechner Institute and with the Festival,” said Saupe. “He thought that literature should challenge us and that it’s part of how we grow in our lives, in our faith.”

“He could quickly identify with writers and students who did not simply accept the doctrine as it was explained to them,” said Vanden Bosch, who worked with Brown for two decades. “Those people who had misgivings, who had doubts, they gravitated to Dale. He helped them find a way through those doubts, misgivings, and struggles. That was clearly his mission.”

Brown is survived by his wife Gayle and his two adult children Anne and Jonathan. A memorial service will be held at 6:30 p.m. on Thursday, October 16 in the student center complex at King University in Bristol, Tenn. 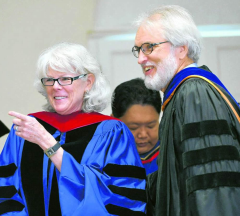 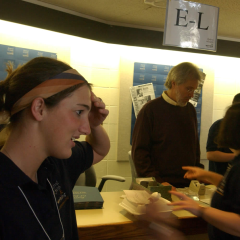 Dale taught me to teach the literature I love, and he opened the joys of Southern authors to me. Huckleberry Finn wasn't just a story anymore after he taught it. It became an undeniable call for social justice. He will be greatly missed!
~Dan Meester '95, superintendent of Holland Christian Schools

Dale was a good friend to me for decades. Over the years, we shared much laughter and his enthusiasm to bring my words to others inspired me. I will miss him. My thoughts and prayers go out to his wonderful wife, Gayle, and their children.
~Frederick Buechner, American writer and theologian (Buechner Institute was named after him)

I took back-to-back classes with Professor Brown, worked as his assistant as he was writing Conversations with American Writers, and was part of the racquetball club that he and Professor Jennifer Holberg led. I cried the day I learned he was leaving Calvin; I cried on Saturday when I learned the Lord had taken him home.

I met Professor Brown at a point in my life when I was trying to figure out who I was, as I suppose we all are at twenty. Dale's great gift to me was pushing me to think of my life with greater wholeness, to recognize that God's vision for my life might be bigger and greater than my own small vision of myself. He mentored me with a generosity and openness that empowered—even gently pushed—me to question, explore, and live out my identity as a beloved child of God.

It's hard for me to articulate exactly what Professor Brown meant to me, except to say that he believed in me—and at a time of insecurity and uncertainty that made me believe I was worth believing in myself. For that, I am eternally grateful.
~Erica Boonstra '08, senior advocacy manager for International Justice Mission