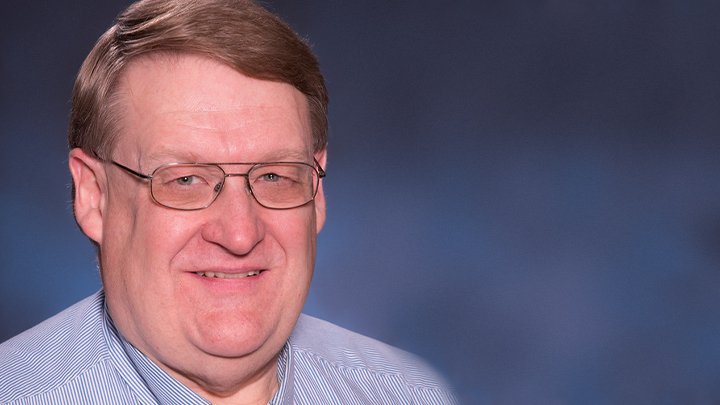 Day-in and day-out Bob DeKraker approached his work with intention.

There was a lot more that he did than we ever realized,” said Gayle Ermer, chair of Calvin’s engineering department.

Bob DeKraker, 65, died of cancer on Wednesday, February 19. He worked at Calvin for more than three decades, and since 2001 as the laboratory manager for engineering. It’s clear that Bob was others-focused and worked tirelessly to make sure that his colleagues were setup for success.

“He was one of the first people I met when I began teaching at Calvin. He helpfully introduced himself and offered assistance with all things related to technology and laboratories,” said Matt Heun, professor of engineering. “True to his offer and for all of my 18 years at Calvin, Bob unfailingly provided prompt and courteous support. He was a rock of the engineering department. To the extent that our trains ran on time, it was thanks to him.”

“He knew how to find parts or supplies and get them stocked before we noticed we needed them; he knew how to wrangle with customer technical support people to get equipment repairs done with a minimal disruption for faculty and students; he could foresee a need and meet it,” said Jennifer VanAntwerp, professor of engineering.

While students had a limited view of the work Bob did on their behalf, his investment in them defines his legacy at Calvin and contributed greatly to their success.

“He took time to help students learn how to use instruments effectively,” said Rich DeJong, professor of engineering emeritus. “When we got a new piece of equipment Bob made the effort to understand it inside and out. He also taught students patience when things weren’t working out and shared in their joy when good things were accomplished.”

“A visual memory I have of Bob is when he helped with the Engineering 101 bottle rocket project. He helped set up launchers, had to bring access to water, compressed air, and then he’d stay for all the labs and troubleshoot,” said Ermer. “Literally, I picture him wet up to the waist, kneeling in the mud, muddy and nasty, fixing stuff to make sure the students could do the work expeditiously. He went above and beyond.”

And he did all of this work, not for personal recognition, but instead to elevate those he served. He was a true picture of a servant.

“He worked faithfully behind the scenes to make faculty and students lives easier,” said Ermer.

“Most students did not know how much he did for them until they were in senior design,” said Leonard De Rooy, professor of engineering. “Bob was an integral person to the senior design course when it came to ordering and getting parts.”

“He always wanted the engineering students to shine on senior design night,” said Michelle Krul, administrative assistant for the engineering department. “He made sure they had whatever was needed so the students could have the spotlight that one Saturday every May. We’d work together late that night cleaning up and he would be so happy about what a great job the students had done.”

And the reason he served the Calvin faculty and students so cheerfully is because he cared about people so deeply.

“I will miss his smile when he would come in my office with a cookie or cupcake and say, ‘It’s break time. Everybody get out of the pool.’ And then he’d proceed to sit down at the desk behind me and ask how my weekend was and share a story about one of his grandkids,” said Krul. “I will miss him in the summer scooping ice cream for the summer research students and his excitement in early September when all the students returned to campus.”

“I will be eternally grateful to Bob for the assistance he gave me in the work to which we were called,” said DeJong.

“Bob was a faithful, honest, and good man. One of the true unsung heroes of Calvin,” said Krul.

“One memory ingrained in my mind is Bob's nickname of "Dr. Bob." For years he ran the computer repair shop in CIT and would often wear a long white doctor's lab coat in the shop. The lab coat and the frequency with which he would repair computers and printers and bring them "back to life" earned him the nickname of "Dr. Bob.”

“When we would have a Christmas party in the engineering department, he showed a video of a fireplace “to make it cozy.” Initially, it was on an old TV. Then, one time, he projected it on the wall in the conference room in the Engineering Building. I was outside walking to the building and saw the video and initially thought that the building was on fire. Bob thought it was funny – but then never showed the video again.”


“I will miss his good-natured ribbing about “shiny Macs.”  I will miss commiserating about working too many hours “for the students” when we bumped into each other in the Science Building corridors late at night or on weekends.  I will miss teasing him about his fear of exploding lab experiments ... The world was better for his presence; it will be worse without his diligence, commitment, and humor.”

“Bob was meticulous about details that no one else saw. I used to tease him that he should be an OSHA safety inspector. No one was going to get hurt or injured in one of his labs that’s for sure.”