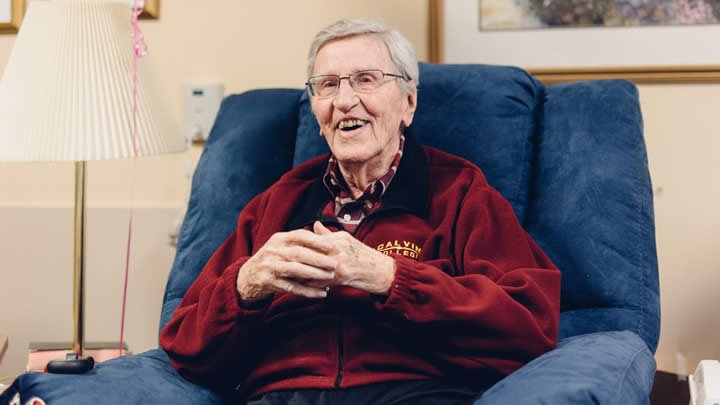 When Alvin Bielema ’42 reflects on his 95 years on this Earth, a theme emerges: gratitude.

He is grateful for his Calvin education, his four years playing basketball, his service in the Navy during World War II, his wife, his family and, most of all, for God’s care and provision.

Bielema recently gathered with family and close friends to celebrate 68 years of marriage to his wife, Jean Bielema. Some of the group convened again recently for a conversation about the highlights of his life.

Bielema came to Calvin in 1938 as the youngest son of a family from rural Fulton, Illinois. He said the size of Calvin, small as its Franklin campus was then, dazzled his senses, coming from a school where eight grades were taught in two rooms.

“Everything was new,” he said, smiling.

He said his basketball coach, the legendary Albert Muyskens, saw that he looked a little lost, so he took him under his wing.

“This is as true as I’m sitting here,” Bielema said. “He saw the captain of the basketball team and said to him, ‘I’d like to have you be the roommate of Al Bielema, at least the first semester, so he gets a good start while at Calvin.’”

Bielema quickly acclimated to the demands of being a four-year starter on the college’s varsity team. He was the team’s leading scorer his freshman year—and was known for his hook shot. He often would shout after scoring, “Yoofy-Do!” to which the Calvin fans responded with a rousing, “Yoofy-Do, give us two!” The nickname “Yoofy-Do” stuck, even to this day.

One event during his Calvin years stands out to Bielema: His father came all the way from Illinois to see one of his basketball games. His dad, who was a passionate sports fan, was immensely proud of Bielema. He often referred to him as “My boy Alvin.” Much to his chagrin, the Calvin fans took to chanting that phrase.

After Calvin, where Bielema majored in business, he went on to earn his MBA at the University of Michigan. Then, he joined the Navy and was stationed in New Zealand during the final years of World War II. Bielema recalls his favorite duty was being appointed the ship’s “marriage officer.” This position entailed interviewing the parents of the sailors’ prospective brides to ensure they gave consent.

“I have one specific marriage in mind that I approved,” Bielema said. “I spent a long period of time talking with the mother and the daughter. The mother started to cry. She said to me, ‘My husband and I, if he were here, would want to make this decision together. Unfortunately, my husband has passed away. But I am happy to give my permission that she become married.’ I took that very seriously.”

When the war was over, Bielema launched a lifelong career as an insurance salesman at Metropolitan Life.

He and his wife, Jean, met through mutual friends around 1945 while Jean was studying at Butterworth Hospital’s School of Nursing. Jean recalls sneaking out the window of the nurse’s lodge to go see him. They married in 1947.

During the early years of their marriage, Bielema played semi-pro basketball for Pasteurs, along with a few fellow Calvin grads. They split their earnings, and Bielema used his portion to buy the couple’s first bedroom set.

The couple has three children: Cindy Terlouw, Sally Koll and Mary Winters. All three attended Calvin College, which their parents paid for.

“Instead of having some of the other luxuries, they chose the value of a Christian education,” Terlouw said. “I really honor that those are the choices they made.”

Added Koll: “It was pretty special to be able to say, I get to go to the same school as my folks, where I could get a solid faith-based education. I received that at Calvin.”

Winters agreed: “I am thankful that my parents instilled in me the desire to attend Calvin and also provided for my education. The Bielema tradition at Calvin has continued through their grandchildren.”

Bielema, who is a lifelong Calvin donor, offers this advice to the Calvin community: “The most important thing is your faith and your love for God.”