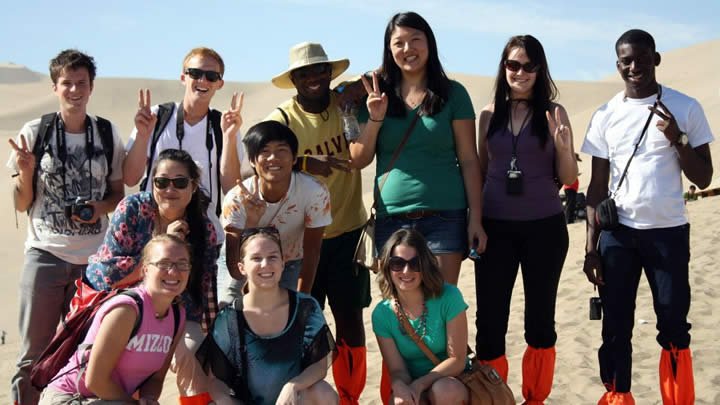 Students on Calvin's semester program in China in Fall 2012.

The Michigan Department of Education put its official stamp of approval on a program that will give Calvin students the option to major or minor in Chinese language education.

Calvin is one of only a few Christian undergraduate colleges in the U.S. to offer a Chinese language major and will be one of the only schools in Michigan to offer a Chinese education program. The new program, which came about through a joint effort between the Chinese and education departments, will help satisfy a high demand for Chinese teachers in the state of Michigan.

And demand for Chinese teachers reaches far beyond the state as 1,600 public and private K-12 schools across the country now offer Chinese language courses, up from 300 just a decade ago.

“That means that while a decade ago only one percent of all schools in the U.S. offered Chinese, four percent now do. The increase in the number of students studying Chinese at Calvin mirrors this increase. Chinese has now become the third most popular AP exam, after Spanish and French.”

One Grand Rapids-area elementary school, Meadowbrook Elementary, has even introduced a Chinese immersion program for kindergarten to third grade students. The school already has about 50 students enrolled at each grade level. Herzberg only expects the number of schools offering similar Chinese programs to rise.

The increased interest in Chinese language education follows China’s emergence as a leading economic power. Herzberg hopes the new program will equip Calvin students to not only teach the language, but also help students better understand China’s culture as it plays an increasingly important role globally.

“With China’s new power economically, we need be involved with and understand it better,” he said. “This is the time to have a Chinese education major. The ripple effects [of this new program] will hopefully be significant in educating American youth about China today. And that starts with being able to communicate with people across the globe. We feel we can equip our students to do that.”

Herzberg, who played an instrumental role in establishing Calvin’s Chinese program 30 years ago, has seen an uptick in Calvin students who want to learn Chinese since China’s emergence as a world power.

The new Chinese education major combines the existing education major with the existing Chinese language major. In addition to the course work, students in the new major will be required to spend a semester studying in China. Calvin already offers a study abroad program in Beijing for Chinese majors and minors each fall that will satisfy this requirement.

The Institute of International Education ranks Calvin College third among baccalaureate institutions nationwide for the number of students who participate in a short-term study abroad program.