A Fulbright to teach in Taiwan 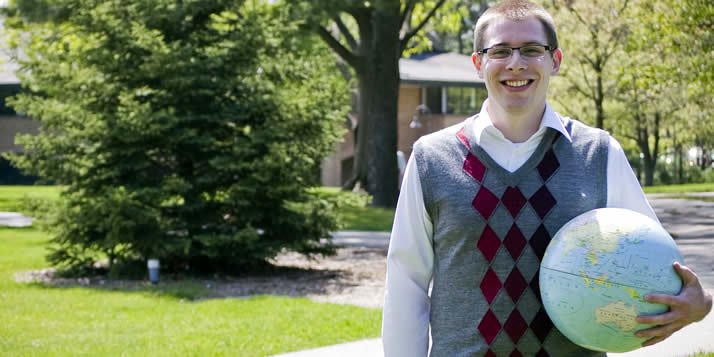 This fall, Senior Ryan DeVries will teach English in an ESL classroom in Kaohsiong, Taiwan.

For fifth-year senior Ryan DeVries, an interest in Asian culture first blossomed when he travelled to Japan with his grandfather during his sophomore year at Calvin. When DeVries returned to Calvin, he began taking Mandarin Chinese and political science courses and discovered he had found his two majors. His fourth year at Calvin he spent a semester in Beijing, China at Capital Normal University.

“To be honest, even though it was a whole semester, it felt really short. I wish I could have stayed longer” DeVries said.

This upcoming fall, DeVries will get a longer sojourn in Asia as he travels to Kaohsiung, Taiwan to teach English in an ESL classroom. His teaching stint will be funded by a Fulbright Scholarship, awarded through the Institute of International Education. He will be working in the English Teaching Assistantship (ETA) program which places recent college graduates in English classrooms around the world. DeVries will be placed in either an elementary or middle school classroom in Kaohsiong, Taiwan, a city of about 1.5 million.

Even though DeVries isn’t an education major, he isn’t worried about the teaching aspect of the opportunity “because I come from a family of teachers, like my mom and grandfather. I’ve also tried to prepare myself a little for the experience by volunteering at my old high school’s ESL program and tutoring a high school student.” Also, the ETA program will prepare him well: “I leave in the end of July and we spend the first month in training, where we are paired with a Taiwanese ESL teacher and act as a classroom assistant,” DeVries said. “This way we get an ESL crash course.”

Instead of being nervous, DeVries is more excited for this opportunity. “Calvin has a tendency to work us hard and intentionally, and to be comfortable in situations where it might not be the most comfortable,” he said. The first-time teacher said he is excited about two things: The first is soaking up a new culture. “The second would be getting to know the other US students in the program,” he said. “There will be about eight to ten of us teaching in Kaohsiung.”

After his year-long commitment, DeVries is planning on staying in the area and hopes to take more language classes in China. “I would really like to become fluent in Mandarin.” DeVries said, “Right now I am only at conversational level.”

DeVries likened the Calvin community and its importance in his life over the last five years to a Chinese proverb from Professor Herzberg’s book, Chinese Proverbs and Sayings: “A single thread cannot make a cord; a lone tree cannot make a forest.”

He believes that earning a Fulbright would have been impossible without the help of his Asian language professors: “Chinese Professor Herzberg and his wife have been huge in how much enthusiasm they have for the language and culture. I was also helped out a lot by Professor Bays of the history department who is the director of the Asian Studies program and Professor Westra in the political science department, who often let me structure my papers around my interest in China.”

Herzberg in turn said of DeVries: “Ryan is a highly gifted and extremely diligent student. He is also one of the most humble, big-hearted, and gracious young men I have ever had the pleasure to know.” Herzberg said. “Ryan will make a wonderful English teacher in Taiwan.”

“I feel blessed and privileged to have this opportunity,” said DeVries “but I don’t think I earned this honor through anything I did really, but more through the activities available here at Calvin and the supporting people that have helped me along the way.”


The January Series moves into living rooms in 2021