A deeper pursuit of religion in poetry 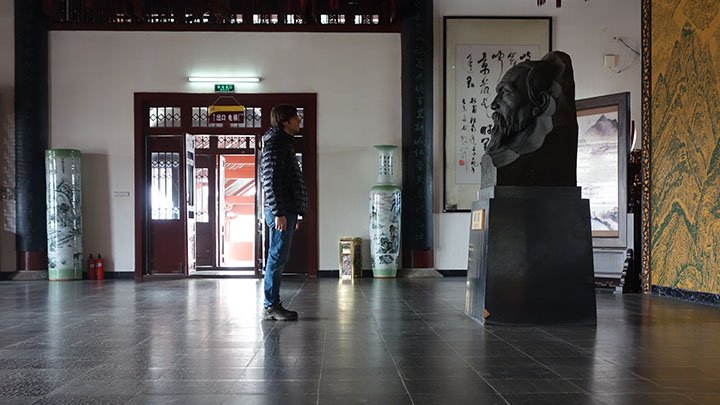 This is how Tom Mazanec ’07 sums up his learning experience between his first poem publication in Dialogue to now studying Chinese literature at Princeton University.

At Calvin, Mazanec routed his education based on a desire to discover more about his interests. “The main reason I was an English major at Calvin was because I figured the best way to be a better writer is to read,” he said, “and I took Chinese on a whim because I took Spanish and Biblical Greek in high school and enjoyed that, so I thought maybe I should try a different language.”

This whimsical pursuit of Chinese study led Mazanec to his ever-increasing fascination of China’s people, culture and historic literature.

“Everything I thought I knew, all the presumptions I had, I had to question again. There’s always more to learn. There’s always something new to discover, and that’s exciting,” he said. “The other thing that’s really appealing is that the classical language is a compressed form, [so] you have to dig things out for yourself.”

With a bachelor’s in English and Chinese from Calvin and a master’s from the University of Colorado Boulder in comparative literature, Mazanec has been working on his doctorate at Princeton in East Asian Studies since 2011. He’s particularly interested in studying Buddhist monks’ poetry in the ninth and tenth centuries, and translating.

“As I went to grad school [at Boulder], I was really interested in translation and the creativity in that, and as I was doing that I realized in order to understand this stuff you have to learn about the background of the culture and the historical context,” he said. “It’s a way for me to combine my two interests in creative writing and digging into the nitty gritty details of another time period and tradition.”

Mazanec appreciates the diversity he encounters at Princeton that enriches his education. “My colleagues and classmates are brilliant – they’re some of the smartest people in the world, and they come from everywhere. That mix is really wonderful with learning things from people of all different backgrounds, both on a personal level and from an academic perspective.”

Between his semester abroad in Beijing, attending the Festival of Faith and Writing and publishing work in Dialogue as a Calvin Student, Mazanec believes Calvin was an important place that fostered the creative side to his literary pursuits.

This summer, Mazanec will be marrying his fiancée, Jenny, whom he met at Princeton. He hopes to become a professor and teach the subjects he is passionate about, while continuing research.

But before becoming a professor, Mazanec desires to bring together a community of young scholars also studying Chinese religion and poetry. He has collaborated with Jason Protass, a professor at Brown University, in creating a workshop to pursue this study, which will be held at Princeton this December.

In light of his experiences and studies, Mazanec hopes Calvin students will continue to be intentional about getting out of their comfort zones, embrace other places and cultures, and, above all, understand people. “Keep empathy,” he encouraged. “Understand that everyone else that you see is also a complex, individual human being.”