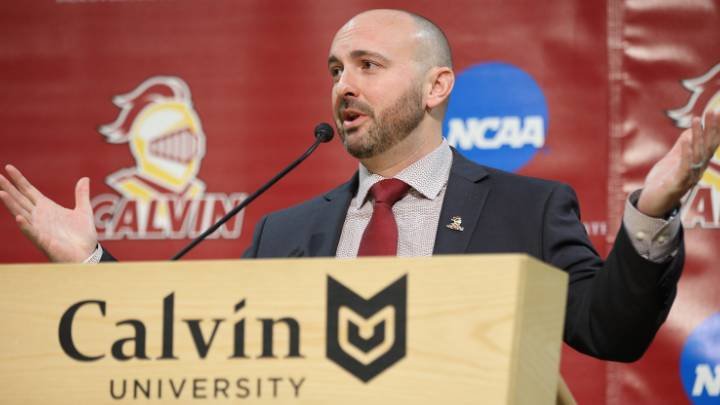 On Wednesday, January 18, 2023, Trent Figg was introduced as the first head football coach of Calvin University. Who is Trent Figg? What kind of program will he help build at Calvin? And what will Calvin’s team look like on the field?

Here’s what we know after Wednesday’s introductory press conference.

1. The Knights will be “explosive”

When describing what Calvin Football will look like, Coach Figg chose the word explosive.

Throughout his career, Figg has experience coaching offense, defense, and special teams making him well equipped to understand how to build explosiveness into all three phases of the game.

“I did that on purpose,” said Figg of gaining experience in all three phases. “It’s been a huge advantage for me because I do feel like I have a good handle on each side of the ball, and it comes from those experiences.”

There was no shortage of interest in the Calvin Knights Head Football Coaching position. In fact, the two-month search turned up nearly 150 applicants. But when Provost Toly and the search committee members worked their networks to ask for who the committee should invite to apply, Trent Figg came on their radar.

When asking for recommendations, Toly, who co-chaired the search committee, said he wanted someone who could be an architect of the program, who could recruit Michigan and beyond, who would develop players, coach for strong results, win the room with multiple constituents, someone who competes on the field, invests in the classroom, and seeks character development.

The committee wanted someone who would build a campus culture that fits the campus’ ethos and Calvin’s commitment to diversity and who would go out of his way to be part of the rest of the athletics department, the university, and the Grand Rapids community, “and what I want you to know,” said Toly to those in attendance at the press conference and those watching online, “is we shared all of this when we worked our networks looking for the right person and Trent Figg had two strong endorsements within those networks before he even applied.”

3. Coach Figg is committed to excellence

While the Knights will be explosive in all three phases of the game of football, Figg says they’ll strive for excellence in three phases as well: athletics, academics, and Christian character development.

“As we move forward with football it is really important to me that this is done the right way,” said Figg. “How is that done the right way? With the right people. We want to identify the right recruits to come into this program, kids that fit Calvin, kids that are tough, kids that are competitive, because that’s exactly what we are going to be on the field. But it’s so important that as we identify kids, as we identify a staff to come here and support Calvin football, that’s exactly what we get, we get great people that all have the exact same vision, because that’s what our goal is of Calvin football to join this athletic department and continue the excellence that’s already been started here.”

“There are not many institutions where you get to recruit a player to play great football, to have great academics, and to have a Christian education. Calvin will be one of only a few,” said Toly.

“I feel so thankful that I get to be the one that stands up here first. I’m so blessed,” said Figg. “How does a small-town kid from Chillicothe, Missouri, you guys have never heard of that place before. How do I get to stand up here at Calvin University and be the first head football coach of Calvin. I’m so blessed. I’m so fortunate to be here. And I’m so fortunate to have such great people around me to start this! This is going to be such a fun adventure. I can’t wait for Saturday afternoons on Calvin’s campus ... It’s going to be exciting. It’s going to be dynamic.”

“It’s [the stadium to be built] been designed really well, there’s a great plan in place right now. It’s a really fan-friendly stadium, which I love. It’s really tight, you’ll be able to hear the crowd. You’ll be able to be up close and personal with the players. So, I love that it’s a small college intimate setting. It’s going to be a ton of fun.”

5. The building process is underway

As Coach Figg begins engaging the process for recruiting both coaches and student athletes, he is seeing no shortage of interest.

“It’s all about the right people. There have been a ton of coaches reaching out saying they are interested in Calvin. I think everyone sees exactly what I see, this is a great place,” said Figg. “So, there’s a lot of people who would like to come and join this program and be a part of this.

How I envision this going forward, we will have an offensive coordinator and a defensive coordinator. I do feel comfortable calling plays, but I like to let our people feel empowered too. Depending on who those people are will dictate how much play calling I will do. We won’t stop until we get the right people for this staff.”

As for recruiting the first wave of players for the inaugural football team, Figg says he’ll focus initially locally to start laying the foundation.