Dr. William Spoelhof, a faithful member of the Calvin College community for eight decades, has passed away.

Spoelhof was president of Calvin from 1951 to 1976, but his association with the college first began in the fall of 1927 when he journeyed from his hometown of Paterson, N.J., to begin his studies at Calvin.

He graduated from Calvin in 1931, taught as a professor of history and political science from 1946 to 1951, and then was called at the age of 42 to become president of his alma mater. 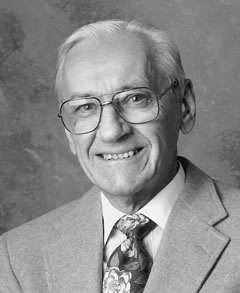 After retiring from Calvin in 1976, he remained a visible figure on campus, maintaining regular office hours, conversing with students, socializing with faculty members and enjoying a variety of campus activities, including varsity sports.

His tenure as president was marked by the college’s move from its location on Franklin Street in Grand Rapids to the current Knollcrest campus.

Once college and church officials made the decision to purchase what at the time was known as the Knollcrest Farm for the then-princely sum of $400,000, the quartet of Spoelhof, Henry DeWit, vice president for business and finance; John Vanden Berg, vice president for academic affairs; and Syd Youngsma, assistant to the president for college development, raised money for and oversaw construction of new buildings, recruited faculty, expanded programs and, building on the foundations laid by previous faculty and administrations, put into place the framework for Calvin’s current place on the higher-education landscape as one of the country’s best Christian colleges.

Spoelhof was always quick to credit this team with whom he worked for the successful change in campus locations and for the expansion of the college’s curriculum, faculty and student body.

Of those three close colleagues Spoelhof once said: “Calvin College would not have been the same if I did not have Henry DeWit, whom I had to talk into office, John Vanden Berg and Syd Youngsma as my colleagues. We were more than just staff members. We were dear friends. We knew each other well. And one can’t say which person should receive the credit for successes, for ours was a united effort.”

Their relationship at Calvin, Spoelhof said, was marked by a trust in each other and a faithfulness to God’s promise and leading.

Current Calvin President Gaylen Byker was a student at Calvin when Spoelhof was president and became a close friend of Spoelhof’s since assuming the presidency in 1995. He said faithfulness was a hallmark of Spoelhof’s life and legacy, noting that one of Spoelhof’s favorite songs was a Dutch hymn whose title is translated as Faith Cannot Do Too Much Expecting.

"He was a consummate scholar, leader, manager and Christian role model,” Byker said. “His involvement very much shaped the college we know today as a leader in Christian liberal arts education. He was thrust into the presidency and performed with great integrity and effectiveness for a quarter of a century. On a personal level I will miss his friendship, his wisdom and his counsel a great deal.”

Former Calvin President Anthony Diekema (1976-1995) agrees. "President Spoelhof was a gentleman, a scholar and a statesman,” he said. “Christian statesmanship was a hallmark of his leadership in higher education. He was a giant of a man on whose shoulders, by the grace of God, I was privileged to stand.”

Diekema noted, too, Spoelhof’s playful side. “He was a man of good humor and quick wit, and this was often revealed through his love for word games,” he said. “He was a master of the pun, both as detector of unintended ones and often as creator of those intended.”

In a 1999 interview with Spark, the magazine for alumni and friends of Calvin College, Spoelhof reflected on his role in the life of the college. He spoke about his love for Calvin students, saying: “I like very much to meet students and enjoy talking with them. I like to find out what their goals in life are, what courses they’re taking, what difficulties they have.”

He also spoke about his love for his fellow emeriti, with whom he had coffee daily at 10 a.m. in a place affectionately called “The Emeritorium.” 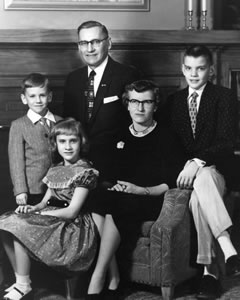 He also spoke in that Spark interview about his wife, Ange (who died in 1994).

“Her death stunned me,” he said. “I don’t think I’ve quite been the same person since. Ours was a very, very happy and successful marriage, and my apartment is loaded with memories of my wife.”

While Spoelhof’s association with Calvin stretched over 80 years, he also spent some interesting years away from the college.

During World War II he worked in the Netherlands for the Office of Strategic Services (OSS), a military intelligence agency that covered all aspects of intelligence: military, social, economic, political and more. First he was assigned to the research and analysis branch of the OSS in Washington, D.C., then became a naval officer and thereafter was ordered to London, arriving there a few days before D-Day, later serving in Europe.

After the war he started teaching at Calvin in 1946, becoming president in 1951, albeit reluctantly.

"I was kind of one of the young turks at that particular time,” he recalled in that 1999 Spark article. “I was not present at the meeting of the faculty—I guess I had a consistory meeting at the church that night—when President Schultze announced his resignation because of ill health. At the next faculty meeting we decided that the search committee would be comprised of faculty members. I happened to be one of those appointed.”

When the committee met to adopt a job description it also discussed the successor, and Spoelhof’s name emerged. He said that he wished to withdraw his name from consideration, but others said that if he did so other people in the group also eligible for the presidency might follow suit. So he agreed to allow his name to stand.

Becoming president, he said, was a difficult situation.

"The faculty members were either my former teachers or my compatriots, and that presented difficulties. Moreover, there was a tremendous need for reorganization, to deal with all of the students coming in, to find enough faculty members to meet larger enrollments, to deal with the big information revolution that hit us at that particular time. The new science was just being introduced.”

The development of the new Knollcrest campus will always be a significant legacy for Spoelhof, but interestingly when he reflected on the work undertaken by the college in the 1960s and 1970s to build Knollcrest, he reflected not so much on buildings, but rather on programs.

"We talked about the curriculum that was going to be taught in that building,” he said. “For example, when discussing the Science Building we said, ‘Look, we’ve never had astronomy before. We’ve never had geology before.’ They had been considered too expensive and dangerous. But they belong in our curriculum. So we had to answer the questions: What is the relationship of laboratory to the formal teaching? How essential is it? What is its place? After we put this together in one simple folder for each building, we’d hand it to our architect Bill Fyfe and say, ‘Now wrap the building around this.’ That’s the way the campus was developed.”

That development continues today as Calvin’s campus has blossomed into a 400-acre jewel at the corner of Burton Street and the East Beltline in Grand Rapids. And among the first buildings visitors encounter as they enter the campus from Burton Street is the William Spoelhof College Center.

It’s but one of several lasting legacies to a man who put an indelible mark on the Calvin campus, joining such things as the Spoelhof Chair (an endowed chair that spans the college’s academic disciplines) and the William Spoelhof Planned Giving Society at Calvin, which helps others assure Calvin’s future.

Many will miss William Spoelhof, president emeritus of Calvin College, but his impact will be felt for generations to come.

William Spoelhof: Veterans History Project at The Library of Congress
Video and transcipts (2002)
“Our group trained them, sent them back with telegraphic equipment, and they would wire intelligence to us.” (Video Interview, Part 1, 23:35)

“It seemed that he had inverted the order of importance, and it was the undergraduates, the young, the unaccomplished who mattered most,” said Abraham Van Engen of former Calvin president William Spoelhof.

A bust of William Spoelhof created by 1958 Calvin alumnus Ken Hoving now sits atop a pedestal in the remodeled atrium of the Spoelhof Center.