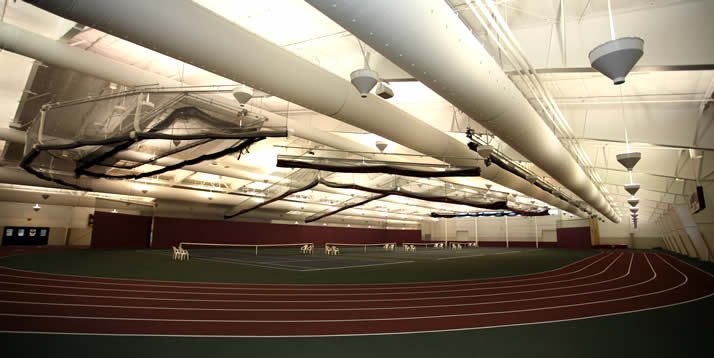 The Calvin volleyball team opened its season in new surroundings as the team held its first official practice—nearly six hours long—on August 16 in the new Huizenga Tennis and Track Center on campus.

A new-look Calvin volleyball team opened its season in new surroundings as the team held its first official practice—nearly six hours long—on August 16 in the new Huizenga Tennis and Track Center on campus.

“I'm really excited about the freshness,” said Amber Warners, who returns for her seventh season as Calvin's head coach. “We have a new building, new uniforms, a new net system and a totally new group of people.”

The exterior of the new Huizenga Center is complete, but interior details remain to be finished. For this volleyball season, two temporary volleyball courts have been set up in the center of the expansive interior, and that space will serve as the volleyball team's home prior to the opening of the Van Noord Arena in 2009. The floor of the building will remain cement until the track and tennis surface is installed, after the volleyball season's completion.

“We're going to obviously have a problem with dust,” said Warners, “and that's something that we will need to address. But I've been pleasantly surprised. The lighting is wonderful and it feels very airy in here. I think it is going to work out just as well as can be expected.”

A year ago Calvin had one of the best home court advantages in the country as students and fans nearly filled the lower bleachers for every home game in the now-gutted Calvin Fieldhouse.

But senior Lauren DeGroot sees a different sort of advantage to the Huizenga Center.

“It will take a while to feel like home and it may hurt our turnout,” said DeGroot, an All-MIAA second team honoree a year ago. “But when a new team comes in it's going to be to our advantage because we will be used to playing in such a big and open area.”

Focus on the team

Warners downplayed the impact the temporary home would have on Calvin's home court advantage.

“The building is just a building and we can do all the things we did last year, the same way in a different building,” she said. “The seniors know this is their shot, and while they're sad that they won't get into the new building, they are going to take ownership that this is their court and their year.”

But the dusty cement and limited bleachers which will surround the temporary courts will serve as a reminder that this is a transition year.

“We had four seniors last year who left a remarkable place in history for the Calvin volleyball team and we're going to miss them tremendously,” said Warners, “but I'm excited about a fresh group and a new core of people and I think they are too.”

“I feel very confident in our seniors, but some of our most dominant players could be freshman,” said Warners. “We lost an all-American setter and two all-American hitters. Where is our hole? Our hitting power and we have some freshmen that have potential to be our best hitters.”

As for the hole at the setter position, junior Nora Bruskewitz and sophomore Carolyn Nelson will battle to replace Katie Zondervan, a four-year starter, All-American and Calvin's career assist leader.

“I am cautiously optimistic that we have the potential to be as good as last year, if not better,” said Warners. 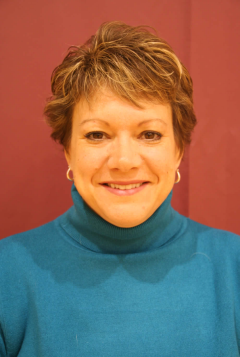 See a complete preview of the 2008 Calvin volleyball season

More on the complex

Take a tour of the new Spoelhof Fieldhouse Complex.

Read more details about the Spoelhof Fieldhouse Complex and see architectural renderings of the finished complex.