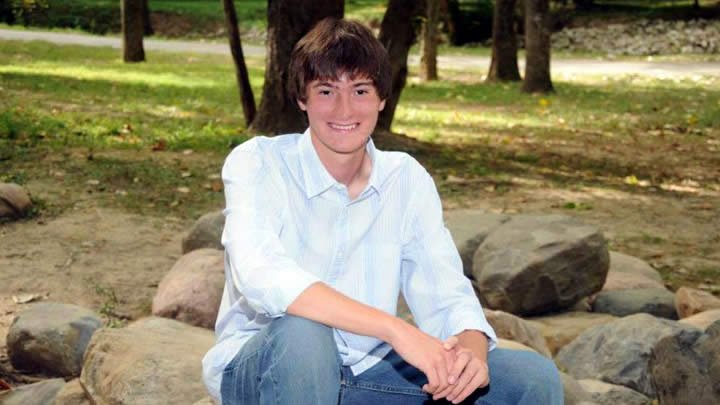 When Sue Garza stepped foot in the Boer Bennink residence hall in fall 2013, she was looking for a first-year student to serve as a community partnership coordinator with the Cook Library Center, where she serves as director. What she found instead? A mentor, a friend and someone who cared as much as she does about the students she serves. She met Michael Thompson.

Thompson, a rising junior at Calvin College, died Friday, August 28, following a lengthy battle with brain cancer. While his life on earth was only 21 years, those who knew him well remember the lasting lessons he taught.

“He had a very big heart,” said Evan Kroon, Thompson’s friend and a junior at Calvin, “he put others above himself.”

“Even though he was going through something difficult, he was compassionate for the needs of others,” said Beth Sherman, another friend, junior.

And that compassion spilled out into service. Thompson never had to think too long when asked to serve. As a first-year student, he jumped right in at the Cook Library Center in Grand Rapids’ Grandville Avenue neighborhood. There, he helped elementary and middle school-aged children with homework and talked with them about life.

“He wanted the best for every student. He was a gift here,” said Garza. “When he worked with middle school students, he gave them guidance. He told them ‘don’t worry about girls, don’t worry about what people are wearing, just study and do your best in school. He hit home to what they were going through, talked at their level and especially, listened.”

“He wasn’t satisfied living a life of faith; he wanted to share that faith with other people through service,” echoed Sherman.

And his faith also manifested itself through his trust in God and through finding joy in the journey.

“He loved God and he loved other people,” said Victoria Johns, Thompson’s cousin and a sophomore at Calvin.

Kroon saw Thompson channel positivity, even during the difficulties of chemotherapy treatment.

“He had every right to be down and out about himself, but he was always positive, enjoying what he did have,” said Kroon. “He saw how God was using this to change his life and others lives.

Garza saw that same positive outlook from Thompson, saying: “He was just the man who brought that glimmer of hope into the grimmest situations, made the best out of anything he was facing.”

Thompson had completed one year at Calvin and was studying engineering. He was active in the college’s Jazz Club and played the drums for worship in his residence hall.

“He didn’t let his cancer get in the way of what he wanted to do. He left a legacy of determination,” said Kroon.

As many who loved him know, Thompson’s mantra was “With Christ, I got this.” It is clear that in both life and in death, His savior got him.

Thompson is survived by his parents Steven and Melissa, and his brother Matthew. Visitation will be from 4–7p.m. on Tuesday, Sept. 1, at Connection Pointe Christian Church in Brownsburg, Indiana, with funeral services there at 10 a.m. on Wednesday, Sept. 2.

"Michael was a thoughtful and engaged student. With design projects he was a great teammate—lifting the team so that the cooperation and the resulting project were better for him being there."

"I recall meeting with Michael during passport advising as he was anticipating coming to Calvin. Amidst the busy blur of advising dozens of engineering students that day, his courage and hope were inspiring to me."

"He was a really good fighter. He never gave up, on anything."

"Without Calvin, we couldn't do our work. And without people like Michael Thompson our life has no meaning ... Having had Michael Thompson in my life has forever changed me in such a positive way. I just feel blessed."

"The last time I saw him we went out to breakfast and in that time laughing and just talking and having a good time, that's what I'll remember about him, sharing those times together. I like that that's the last picture I have with him."