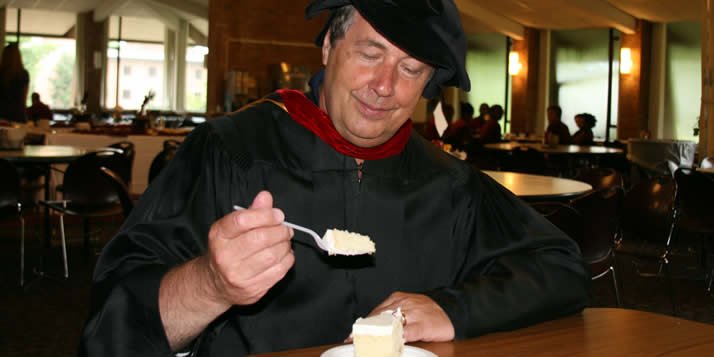 John Calvin samples the cake baked in honor of his 502nd birthday.

English professor James Vanden Bosch donned the traditional black garb to play John Calvin on the reformer's 502nd birthday. Read his speech and a short Q&A about the responsibilities of playing John Calvin.

Good morning, and welcome to the day-late party celebrating my 502nd birthday. The heavens may be rumbling, but I’m happy to be here, at a college that bears my name and even celebrates my birthday.

In my two minutes with you this morning, I’d like to make a suggestion about the John Calvin you seem to honor here in West Michigan.  It’s apparently the John Calvin of an austere theology, sometimes with an admirably broad scope—divine sovereignty, creation-fall-redemption—and sometimes with a much smaller but still important focus, on personal salvation—election, reprobation, predestination, and total depravity. This is the stern John Calvin of certain varieties of European and North American Christianity, and there’s a lot to be said for the themes and emphases I’ve just enumerated.  But this may be a John Calvin who is hard to love, hard to warm up to, hard to attend to, even, except in fear and trembling.

But take it from me, there’s more to John Calvin than any list of five points; sometimes the theologians and clergy reveal more about their own fears and hopes than they do about the great good news of the gospel that I thought I was championing.

So let me recommend another, complementary, version of John Calvin this morning, one suggested by a novelist from Iowa, Marilynne Robinson, who wants to focus on the humanism expressed in my work. Here’s what she says:
[Calvin’s] humanism is expressed precisely in his understanding of the teaching of Genesis, that humankind is made in the image of God, the likeness being ‘that glory of God which peculiarly shines forth in human nature, where the mind, the will, and all the senses, represent the Divine order.’  . . . .  He places this incandescent divinity—it is the glory of God that ‘shines forth from human nature’—at the very center of individual experience and presence. And this sacredness is an attribute not of saints only, nor of Christians only, but is inherent and also manifest in all human beings as such. . . . .  Perception is at the center of his theology, both because it is the felt and active potential for experiencing the sacred, and also because it is the image, the great gift, ‘a remarkable instance of the Divine goodness which can never be sufficiently proclaimed.’
. . . .
The beauty of what we see is burdened with truth. It signifies the power of God and his constant grace toward the human creature.  . . . .  ‘These are unfailing signs of divinity in man.’ Calvin sees the creative freedom and ingenuity of human beings in the world as yet another manifestation of the divine. This is neither the Calvin nor the Calvinism of folklore, but the language is unambiguous.

So celebrate my birthday today by being more thankful for your senses and for your mind and for your perception of all things, great and small—the beauty of a summer storm and of a clearing sky, of this campus, of the people around you, of the cake and coffee, of the telescope and the library, and start to take your own perceptions a little more seriously—they are evidence and proof of God’s image shining forth in you.

Happy birthday to me, and to us all.  Let them eat cake.
Amen. 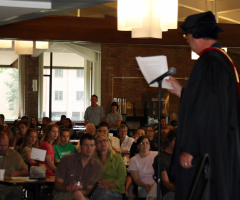 Q: Why did you agree to play John Calvin for this event?
A: I’ve been asked before, and they’re running out of people.

Q: What kind of preparation did you do for your role?
A: I did virtually no preparation. I got my robe out of the bag and the Reformation hat out of (the) vault over there in the Meeter Center archives.

Q: What are the qualities that you’ve admired in previous John Calvins?
A: Generally the attempt to keep things lighthearted, Calvin being—for almost all of us—a very stern and austere presence. So the temptation for all of us is to go very light … This won’t be Anonymous Bosch doing the job today, but a happier John Calvin, trying to be seen as less than horrifying.

Q: Who would you like to see play the role of John Calvin at this event in the future?
A: Any president of Calvin College should sooner or later play the role.

Q: How will you know you’ve been a success in this role?
A: If I’m happy with it. If I say astounding things.

Q: So, why did you decide to say “Yes”?
A: I’m doing this out of duty, obligation. The sterner side of John’s Calvin’s theology is what’s leading me to do this.