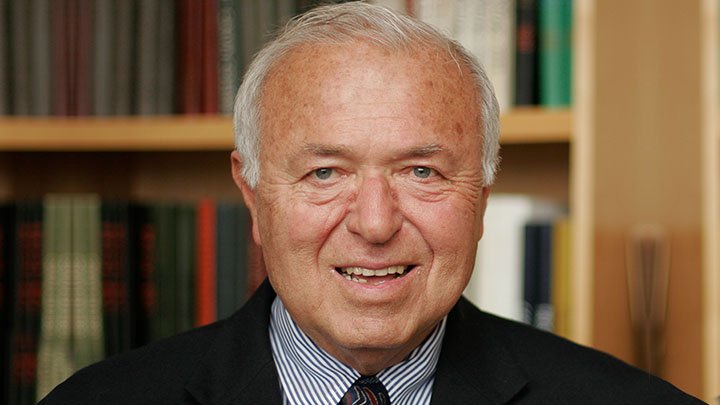 “I love this place. I love Calvin.”

These are words Ken Erffmeyer heard around the office often from his colleague John Bielema.

“John had tears when he talked about the mission of Calvin and how God had blessed his life,” said Erffmeyer, vice president for advancement and Bielema’s supervisor from 2008-2017.

Bielema’s love for Calvin’s mission took root when he was a student in the 1950s. And his passion only grew through the years.

“Many years ago there was a group of volunteers who would make calls on businesses soliciting gifts for the college,” said Jeff Pluymert, a regional gift officer at Calvin University and longtime colleague of Bielema’s. “John was an enthusiastic volunteer. He often would complete his list of business contacts and then call and ask for more.”

Forty years after graduating from Calvin in 1960, Bielema would return to his alma mater in an official role ready to raise as much money as he could to support Calvin’s mission.

“He treasured the value of his Christian education at Calvin and passionately promoted that message to each and every donor and prospect that he called on,” said Bob Berkhof, senior associate to the president at Calvin.

“No one was more driven to raise funds for Calvin than John Bielema. He never met a person who he did not think could support Calvin's Annual Fund with a generous gift...and he was never bashful to ask!,” added Berkhof.

And for Bielema, he didn’t let anything get in his way. His former colleagues describe him as tenacious, driven, and competitive. An unanswered phone call and an unreturned email wasn’t a dead end for Bielema, it just sent him down another path.

“John brought great energy into the office,” said Erffmeyer. “He loved to get the appointment [with a donor]. If you did not respond to John, you raised the stakes [for him]. He would start to call you from different phone numbers, track you down at events, or track you down having a meal with a relative.”

His colleagues say this work ethic was born out of that love for Calvin’s mission. It’s that passion that consistently led Bielema to be one of the top gift officers each year in total money brought in to Calvin to support its mission.

“He knew what an impact it made on his life, and he wanted the same for every student who attended Calvin,” said Pluymert. “John’s legacy will be how deeply he believed in Calvin and its mission.”

And the team he worked with for many years are continuing to build upon that legacy, including coming off of a record-setting fundraising year.

“John was simply a tremendous asset to Calvin's development efforts,” said Berkhof. “He was totally dedicated to his college, his family, and his God.”

Bielema was preceded in death by his wife Judith Plekker Bielema in 2019. They were married 33 years.  He is survived by the mother of his children, Joan Bailey Anderson, his children Kimberly Barentsen and John Jr. and Megan Bielema, and six grandchildren.

One Wrong Turn Led to a Lilly Fellowship