A problem-solver and the Putnam 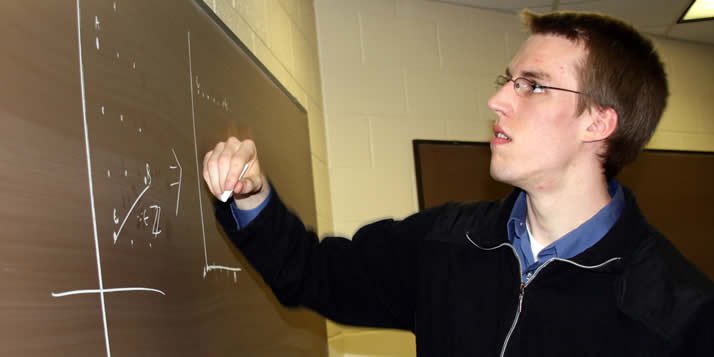 A math and computer science major was a top scorer in a prestigious international math competition.

No calculators. No textbooks. Just a pencil and paper.

“Given that A,B and C are non-collinear points in the plane with integer coordinates such that the distances AB, AC and BC are integers, what is the smallest possible value of AB?”

“Just the intellectual puzzle of it is very appealing to me,” said Calvin senior Ethan Van Andel.

This was problem B2 in the 71st William Lowell Putnam Mathematical Competition—considered the most prestigious and challenging math competition in North America.

Unlike thousands of Putnam participants, Van Andel found a solution to this problem.

“In problem-solving you start by removing all unnecessary complexities,” said Van Andel.

Van Andel, a mathematics and computer science double major, scored a 46 on the 2010 Putnam, ranking him in the top 250 of all participants continent-wide—one of the best scores ever achieved by a Calvin student.

A head for figures

“At the simplest level, it’s just those are the gifts God has given me,” he said, “the way he made my mind works well for that sort of thing.”

In 2010, Calvin had four students turn in noteworthy scores. Van Andel’s 46 led the way. Senior mathematics major Jim Hays scored a 28, and juniors Ben Lewis, a mathematics and physics double major, and Ed Smilde, an engineering major, each scored a 10.

The Putnam consists of 12 problems, each worth 10 points. Students work on six problems during a three-hour period. Then take a break. Then work for three more hours on six new problems. Chris Moseley, a mathematics professor at Calvin, said that any score of 10 or more on the Putnam is impressive.

A one or two means the student receives partial credit. “You know what you are talking about, but you've missed one or two key steps,” describes Van Andel. Whereas an 8 or 9 would be given “if you have everything right except you have a sign error or something like that,” he said.

And a “10” is reserved only for a perfect solution.

Patience. Insight. Preparedness. And a certain extent of luck or providence.

According to Van Andel, that is what it takes to be able to solve these types of problems.

“It requires a certain element of insight you can’t force,” he said.

Which is why at 6:30 p.m. every Wednesday, professor Moseley sets out two pans of brownies or a tin of cookies in one of the interior classrooms in North Hall. He clears the chalkboards and then passes out problems. He asks the students to solve them.

“Our goals were not to win math competitions,” said Moseley.

Instead he said that he along with mathematics chair Mike Stob, created the Problem Solving Club with two goals in mind: the first, to give students experience with harder concepts, thus preparing them for grad school.

“It can take weeks or months to think through these research problems in mathematics,” said Moseley. “They are hard. That’s why they [grad students] get PhD’s for them.”

And secondly, to provide students some community—“some sort of nucleus activity,” as Moseley describes it.

“He almost always amazes me with some insight that he has,” said Moseley of Smilde, who is a regular attendee on Wednesday nights. “Ed will come up with a solution I’ve never thought of.”

“There are usually lots of different ways to get to a solution on a problem,” said Van Andel. “You learn how different people think and how they approach problems. That can be very valuable.”

And putting the fun back in math can too, noted Moseley.

Moseley sees Wednesday nights as a compliment to a strong, recently re-tooled mathematics curriculum—an hour-and-a-half break from the routine.

“We just enjoy playing with these problems,” said Moseley. “The preparation they are given is really the Calvin mathematics program.”

And when the students put the entire puzzle of preparation together, the solution is results—at the highest of levels.

“The students that do well on the Putnam are some of the best minds in the nation, in fact, in the world,” said Moseley.

Van Andel is one of them. Van Andel graduates in May. Then, he’s headed off to graduate school at UC-Berkeley to study applied mathematics.

“The thing about Calvin is that because of its liberal arts focus … you see how all the areas of knowledge God has given us are connected and it fosters a pattern of thinking that is necessary for this sort of problem-solving.” 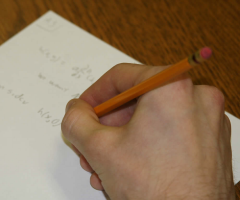