In July of 2020, Congressman John Lewis passed away after serving over thirty years in the United States Congress and inspiring generations through his courage and faith as a civil rights leader. 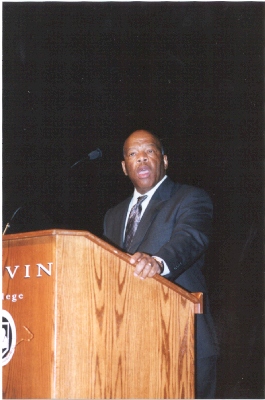 Twenty years ago in April of 2000, the Henry Institute was pleased to host Congressman Lewis as he delivered the 4th annual Paul B. Henry Lecture at Calvin College to an overflow crowd. Speaking on “Struggling Toward the Beloved Community”, he shared his remarkable story and a vision for justice and equality for everyone, without the scourges of racism and discrimination.

Lewis knew the Institute’s namesake, Paul Henry, as a fellow member of Congress and testified to his Christian character and commitment. The two shared a common faith and an understanding of the power of political policy and democratic voting rights in reaching goals to bring the country away from the legacy of racism and injustice. Their work toward what Lewis and his fellow advocates called the beloved community was ultimately based on their view that all people are created in God’s image.

It was an honor to host Congressman Lewis in 2000, and so we are very pleased to publish online for the first time the video of the congressman’s address as well as two interviews he did while on campus, one with Calvin political scientist Doug Koopman, and the other with Calvin professors Garth Pauley and Randall Jelks. We’re also delighted to include a reminiscence from Anu Teodorescu, who interned in the congressman’s office this last Spring, as well as some thoughts from Rev. Doug Tanner who met John Lewis through the Faith and Politics Institute.

Struggling Toward the Beloved Community

Civil Rights: Then and Now

Dr. Garth Pauley of Calvin’s communication department has written about civil rights efforts in the US, including Congressman Lewis’s ongoing contributions and dedication to that struggle. He offers some thoughts at his passing.

Anu Teodorescu (May 2020 Calvin graduate) interned in John Lewis’s Washington D.C. office during this spring’s 2020 Semester in Washington D.C. Program and offers these thoughts on her time working for the Congressman. 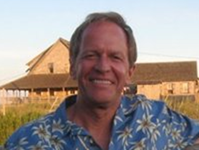 Rev. Doug Tanner knew Congressman Lewis as a friend, mentor and partner and reflects on Lewis’s grace, strength, and constant work for justice.