We are currently developing sensors that selectively detect fluxes of small molecules in living cells.

We are primarily focusing on bacterial periplasmic binding proteins, such as maltose binding protein, that undergo ligand dependent changes in protein conformation or tertiary structure (see movie). Proteins that provide the small molecule (e.g. maltose, lead ions, glucose, glutamate) selectivity are engineered to bind semiconductor nanoparticles, called quantum dots. Quantum dots have an intense and photostable fluorescence compared to organic fluorophores. The proteins are also engineered to bind metal complexes or organic fluorophores. In our first generation biosensor a ruthenium complex (top left) was attached to maltose binding protein, which when attached to ZnS coated CdSe nanoparticles (botom left) provided maltose-dependent changes in emission intensity. The mechanism by which the maltsoe-dependent emission intensity changes occurs comes from an electron transfer reaction between the ruthenium complex and the quantum dot (upper right). The majority of projects in the lab are based on this core technology and are focused on designing proteins to bind molecules other than their natural ligands (e.g. lead ion biosensors) or focused on fluorescence microscopy for live cell small molecule imaging and single molecule fluorescence analysis. 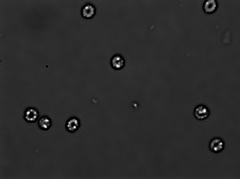 We are interested in applying our nanobiosensor technology to imaging fluxes of small molecules inside or on the outer surface of living cells. For instance, calcium ion fluxes are vital to neural synapses and signal transduction and have spawned research into calcium ion selective fluorophores such as Fura-2. Our technology will provide sensors that can be used for hours inside living cells as opposed to minutes with current organic-based fluorophores. An additional feature with our quantum dot-based sensors is that molecular fluxes can be imaged in red blood cells. The figure above and to the left shows InGaP nanoparticle fluorescence from inside rabbit red blood cells. An additional feature of quantum dots is that the emission linewidth is small relative to organic fluorophores. This means that it is possible to image multiple quantum dot sensors using monochromater or filter cube selection (e.g. top, right figure). The ultimate goal is to use these sensors to understand the molecular basis of diseases controlled by small molecule transport (e.g. Diabetes mellitus, lead poisoning, atherosclerosis).

Using a microscope outfitted for total internal reflected fluorescence (above, left) we are examining the fluorescence from single protein-quantum dot assemblies. Single qunatum dots have intermittent fluorescence (click here for a movie), called "blinking." Fluorescence intermittency is modulated by electron transfer reactions with the excited states of fluorophores. From a series of experiments, we expect our nanobiosensor systems function through an analyte-dependent ground state electron transfer reaction that effects the character of fluorescence intermittency. This concept is shown above (right), where maltose (analyte) introduction changes not only the average emission intensity but also the deviation of the emission intensity. We are developing methods for analyzing maltose binding to single maltose biosensors to characterize the heterogeneity of maltose affinities and lower limits of detection in these systems. We expect that reporducible heterogeneity will increase the analyte sensitivity by orders of magnitude from solution measurements. 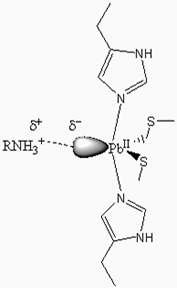 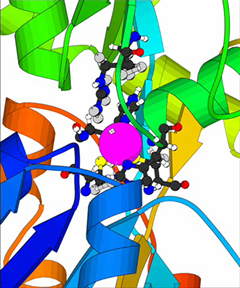 We have used a computer algorithm (Dezymer) to introduce side chain repalcements that allow phosphate binding protein to selectively bind lead ions. The coordination sphere (above, top, left) whose geometric parameters were used for Dezymer calculations was selected due to the preference for a stereochemically active lone pair (SALP). An interaction with a pre-existing, positively-charged arginine residue from the phosphate binding site (above, top, right) seems to still allow lead ion binding but (presumably) repels zinc, cadmium, and copper ion binding. There is also a quicktime movie of the simultated binding site provide. Introduction of the redesigned phosphate binding protein into the nanobiosensor system provides a 100 nM lower limit of detection for lead ions (above, bottom) that can be performed in the presence of red blood cells. 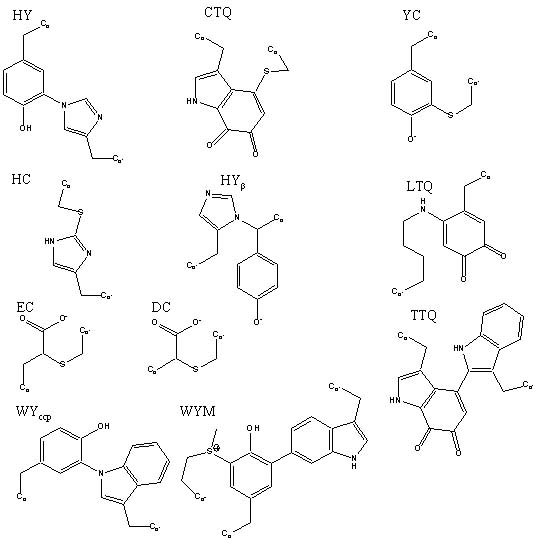 Cofactors generated through posttranslational redox reactions are best known from green fluorescent protein. However, a series of smaller cofactors (above) are formed by association with metal centers in proteins and participate in concert with these metal centers often times for enzymatic function. Our lab is investigating this relatively new class of protein cofactors using computational modeling, protein design, and small molecule synthesis.